PELHAM— A 43-year-old Bessemer woman is facing a trio of felony charges after being arrested by the Pelham Police Department May 5, according to her arrest warrants. 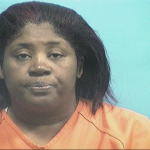 Felicia Groom was charged with identity theft, second-degree theft of services and fraudulent use of credit card, as well as three counts of probation violation and 19 counts of alias writ of arrest, according to the Shelby County Sheriff’s Office website.

Groom’s charges are allegedly related to events that took place in February-July 2015 and July 7, 2015, according to the warrants.

On July 7, 2015, Groom allegedly used a visa bank credit card “for the purpose of obtaining property or service with the knowledge that such card was stolen, or had been revoked or canceled.”

The same day, she also allegedly obtained services from a moving company valued at $1089.11 and used “deception, threat, false token or other means to avoid payment for said services.”

From February-July 2015, Groom’s arrest warrants state she obtained records or access to identifying information “that would assist in accessing financial resources” or “obtaining benefits” of a female victim.

Groom, who lists an address in the 5500 block of Timber Leaf Way, was arrested by the Pelham Police Department May 5 and was transported to the Shelby County Jail. She is currently being held on bonds totaling $43,645.