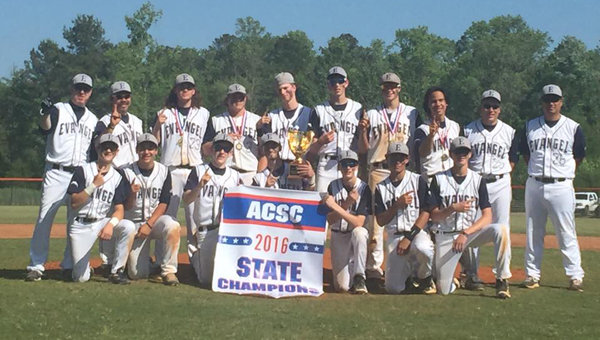 The Evangel Christian baseball Lightning won the ACSC state championship on May 7 with an emphatic 13-0 win over Hope Christian. (Contributed)

MONTEVALLO – After beating the Tuscaloosa Home Educators and scraping past Ezekiel Academy with a run in the bottom of the seventh inning on May 5, the Evangel Christian Lightning qualified for the ACSC state championship game. The Lightning hosted the championship game and played county rival Hope Christian on May 7. After a tight first inning of play, the Lightning blew the doors off the game in the bottom of the second, scoring 12 runs and taking a 13-0 lead, eventually winning by that margin.

Hahn Hahn Lau led off the bottom of the first inning for Evangel and hit a double to left field on the third pitch of his at bat. After advancing to third on an Austin Simmons groundout, Lau was brought home when Cameron Kimbrel followed suit and grounded out to short, giving Evangel a 1-0 lead.

The bottom of the second inning saw Evangel hit nine singles and a triple while two batters reached base on balls and another reached safely due to error. When the dust settled and Kimbrel, the seventeenth batter of the inning, finally flied out to right field for the third out after singling earlier in the inning, Evangel had scored 12 runs in the inning to take a 13-0 lead, effectively sealing the win.

Weston Akin took the mound to start the game for the Lightning and threw 35 pitches over three innings of work, giving up just one hit and no runs in his time on the mound. Matt Sides came in for an inning of relief before Jacob Albright, who finished the final inning, relived him.

Lau finished the championship game with a 3-for-4 line and two RBIs, while Akin also had a multi-hit game and drove in three runs. Simmons, Kimbrel, Max Shaw, Satcher Wells, Josh Lau and Zach Helton each added a hit for the Lightning, who finished the day game with 11 hits and 13 runs.

John David Birdsong and Chris Richardson were the only two Hope Christian batters to draw hits on the day for the Eagles.

Evangel finished the year with a 23-14 record and the ACSC state championship.