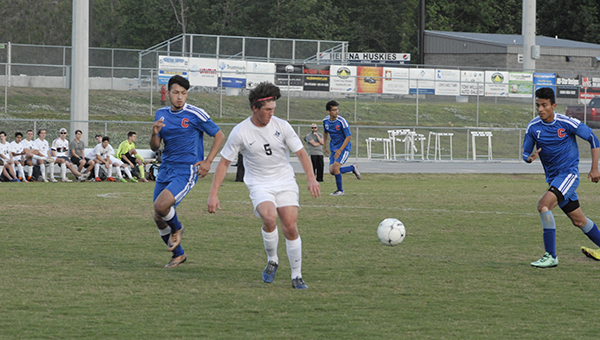 Helena senior Jeremy Hughes (5) and the rest of the Huskies are returning to the 4A-5A Final Four for the second consecutive season after defeating Demopolis 2-1 in overtime on May 7. (Reporter Photo/Graham Brooks)

DEMOPOLIS–For the second consecutive season, the Helena boys soccer team will be making a return trip to Huntsville to the 4A-5A Final Four after defeating a tough Demopolis team 2-1 in overtime on Saturday, May 7.

Helena traveled to play their first away game of the post season and head coach Zach Morgan said it took his team some time to get use to the visitor’s field and said the referees took multiple measurements of the field to ensure it was the correct dimensions.

“They were a physical team and had a small field and they used it to their advantage,” Morgan said of Demopolis. “They were more physical than we anticipated and we were not use to playing on that small of a field.”

Regardless of the field, the Huskies were able to power through and score the first goal of the game as senior Jeremy Hughes put one into the back of the net in the first half, bringing his goal total to 25 on the season and putting the Huskies ahead 1-0 heading into halftime.

Demopolis would not go down easy, as the Tigers came into the game as a top five team in the state and had given up zero goals in wins over Holtville and Marbury in the first two rounds of the playoffs.

The Tigers tied the game 1-1 in the second half to send the game to overtime and Morgan explained how Helena tried to prevent Demopolis from scoring.

“We made sure to cover Adam Brooker, who is really good for them and the other forwards from making forward runs,” said Morgan. “That’s how we set up tactically.”

Helena broke the tie in overtime as another senior came through when it mattered most for the Huskies.

The Huskies went ahead for good 2-1 when Jason Nichols scored off a direct kick to propel Helena to the Final Four.

Morgan said his returning guys knew what they had to do this past summer to get back to Huntsville and they did just that.

Helena will travel to Huntsville to take on Alabama Christian Academy in the Final Four on Thursday, May 12 at 5:30 p.m. at John Hunt Park for a berth in the state championship game.

The Helena Lady Huskies soccer team celebrates after defeating Marbury 2-1 in double overtime in the third round of the... read more