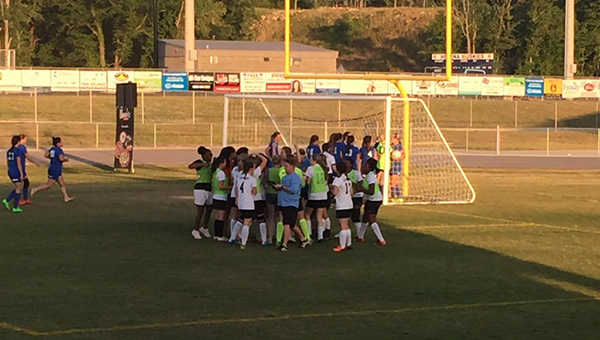 The Helena Lady Huskies soccer team celebrates after defeating Marbury 2-1 in double overtime in the third round of the playoffs on May 7. (Contributed)

HELENA–In just year two of the Helena High School girls soccer program, the Lady Huskies will be making their first trip to Huntsville to play in the 4A-5A Final Four after defeating Marbury 2-1 in double overtime on Saturday, May 7.

Helena continues their hot streak in the playoffs and head coach Clif Naron credits much of the success from scheduling tough opponents like Oak Mountain, Chelsea, Homewood, Spain Park, Indian Springs and more in the regular season that has helped the girls late in the season.

“We started with girls last year who didn’t really know the game but we challenged them to play top 10 teams not only in the county but in the state,” said Naron. “This year, we wanted to go out and challenge ourselves and early in the season we got shutout multiple times and had some tough games but they played from start to finish and it’s showed this year. We started the season struggling and all of a sudden it started clicking. We were passing in space and making runs and it’s happened at the right time.”

In the first half, neither Helena nor Marbury could breakthrough for a goal, but in the second half Helena junior Skyler Conway broke the tie after putting one into the back of the net off an assist from Aszah Preuc.

With 1:40 left in double overtime, Conway took another pass from Preuc and scored her second goal in the game, which proved to be the deciding goal.

Helena came into the playoffs with a 5-16-1 record and now find themselves packing their bags for Huntsville and quieting the critics, which Naron said “has been one of the fun parts” for the girls as they prepare for the Final Four.

When asked how exciting it was for both the girls and boys to take a trip to the Final Four, Naron said it’s great for the program as a whole.

“We’re going to try to run a soccer program here,” said Naron. “To be able to take the boys up with the girls is awesome because we consider ourselves one big program and that’s pretty special.”

Helena will travel to Huntsville to take on St. Paul’s in the Final Four on Thursday, May 12 at 3:30 p.m. at John Hunt Park for a berth in the state championship game.