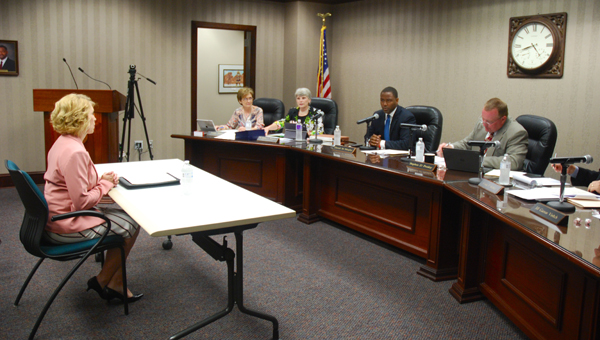 The Hoover Board of Education interviews Tina Hancock for the city school system’s chief school financial officer position during a May 9 meeting. (Reporter Photo/Molly Davidson)

HOOVER—The Hoover Board of Education interviewed a third candidate for the city school system’s chief school financial officer position during a May 9 meeting.

“I know what goes on in the classroom. That’s the most important, and that’s what we’re here for,” Hancock said.

Hancock said she’s interested in joining HCS because of the system’s reputation for academic excellence and success.

“Hoover is one of the most recognized and most respected (systems) in the state,” Hancock said. “It’s a standard of success here, and I’d like to be a part of that.”

The Hoover City School System is much larger than Jackson County Schools, which serves around 6,000 students and has a yearly budget of roughly $40 million, however Hancock said the difference in system sizes does not change the CSFO duties and processes.

“You’re still working through the same processes, still the same rules you need to apply, the same laws you have to follow,” Hancock said.

Hancock has experienced cutting a budget with the Jackson County School System. As a former classroom teacher, she said she looks to make other adjustments, such as refinancing debt and ensuring staff is fully utilized, before eliminating positions.

“Being a classroom (teacher), I’m always sympathetic to that process. I think you need to look at the overall,” Hancock said. “There are some smaller changes you can do as well…I’d want to be sure the impact in the classroom is small.”

The BOE requested more time to consider each candidate prior to making a decision. BOE member Stephen Presley said a “later meeting” will be called for the board’s decision.