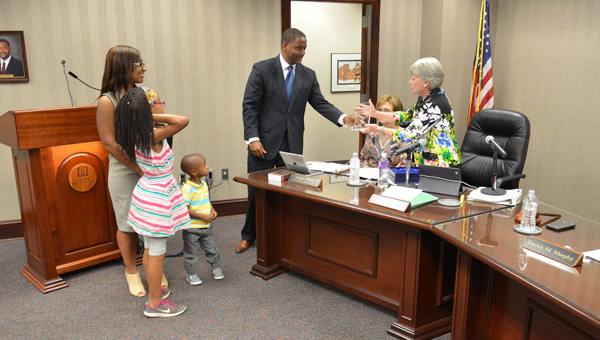 Hoover Board of Education President Derrick Murphy is recognized for his service to the school system by Hoover City Schools Superintendent Dr. Kathy Murphy during a May 9 meeting. (Contributed)

HOOVER—The Hoover Board of Education recognized several changes and bid farewell to key school officials during a May 9 meeting. In addition to electing new board leadership, three people were noted for their service and dedication to the Hoover City School System.

After five years on the BOE, current board president Derrick Murphy presided over the final regular meeting of his term. Murphy was appointed to the BOE in 2011, and elected as board president in 2015.

“It’s been a pleasure serving on the school board,” Murphy said, with his wife, Shenavia, and two of their children, Bailyn and Asher, by his side.

Murphy chose not to seek reappointment to the BOE as he is currently running for Hoover City Council. His position will be filled by Deanna Bamman, who was appointed to the BOE last month.

“I certainly appreciate all the things you’ve done for me over the past year,” Hoover City Schools Superintendent Dr. Kathy Murphy said to Derrick Murphy, thanking him for his service.

Hoover City Schools administrators Melody Green and Cathy Antee are also leaving the school system, both retiring at the end of the year.

Green, an assistant superintendent, has worked in the district for 33 years. Antee, the chief school financial officer, is retiring after 25 years with Hoover City Schools.

A reception honoring Derrick Murphy, Green and Antee was held at the Hoover City Schools central office following the meeting.

The Hoover Board of Education also elected new leadership for the coming year. Current Hoover BOE vice president Stephen Presley and board member Earl Cooper were unanimously selected as board president and vice president, respectively.

The next regularly scheduled BOE meeting will be on June 13 at 5:30 p.m. at the Hoover City Schools central office.

In other business, the Hoover BOE:

-Approved the restructuring of the system’s extended day program, eliminating full-day camps over the summer and holidays.

-Approved changes to the system’s policy manual, which was updated with information from the Alabama Association of School Boards policy pipeline.

-Adopted textbooks for the school system.

The Hoover Board of Education interviews Tina Hancock for the city school system’s chief school financial officer position during a... read more