Rep. Gary Palmer, R-Alabama, announced Emery Walton, a student at Indian Springs School, as the winner of the sixth district’s 2016 Art Competition on May 3. 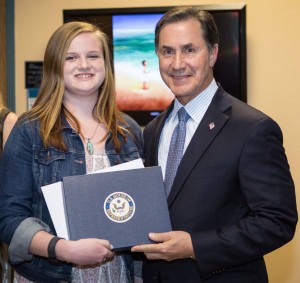 “There’s incredible creativity in the sixth district, and really throughout the state of Alabama,” Palmer said. “Every year this competition displays a great deal of talent, something our district and indeed the state can be proud of. I want to especially congratulate Emery Walton for being selected as our overall winner of the Art Competition.”

Walton, along with the other congressional district winners, will be invited to attend an award ceremony in Washington, D.C., on June 23, where her work will be unveiled before being displayed in the U.S. Capitol for a year.

Eighty-four students from 24 high schools submitted original artwork for this year’s Congressional Art Competition. Their artwork was displayed at the Riverchase Galleria in Hoover for a week.