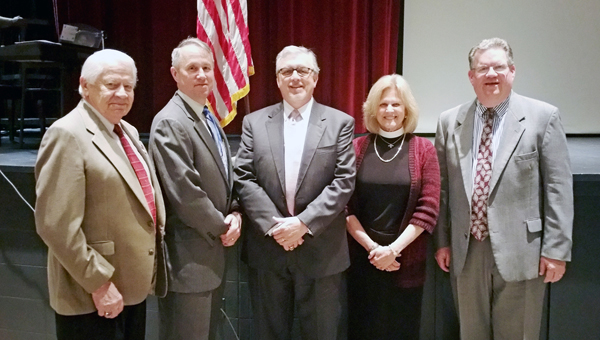 The event was a way to pay tribute to all veterans who have given so much of themselves so that our country can continue to have the freedom we hold so very dear.

The event also served another purpose, which was to encourage members of the community to volunteer to help greet, guide and assist visitors in Montevallo at the Alabama National Cemetery Memorial Day Program, Monday, May 30 from 7-11 a.m.

Leaders from Columbiana United Methodist Church, the Columbiana Ward of the Church of Latter Day Saints and First Baptist Church of Columbiana, each took time to speak on the topic of freedom and service.

Pastor Buster Timmons of Columbiana United Methodist Church noted that during the history of our great nation, over a million men and women have died while protecting our freedom.

“These sacrifices are for hope,” explained Timmons, stating that we should try to live a life worthy of those who made the ultimate sacrifice on our behalf.

Timmons reflected on what those men and women would want us to feel about their sacrifice.

“Giving up one’s self for a cause greater than ourselves makes it worthwhile,” said Timmons, explaining that he feels veterans, both living and dead, would want us to think of life, not death.

Bishop Nathan Thompson of the Columbiana Ward of the LDS Church spoke next on what we as citizens can do to honor our veterans.

“Today I would issue a challenge to you. Ask God to support and protect those who serve. Pray for those that are in harm’s way,” said Thompson.

“Each night as you take a few minutes to commune with your Father in Heaven before retiring for the night, pray for those that are in harm’s way,” said Thompson. “Each time you bless the food, pray for those who serve. Each time you open and close a meeting, ask God to protect those who are guarding our freedoms.”

Charles Powell, Minister of Music at First Baptist Church of Columbiana, spoke about recognizing the sacrifices that are made every day by our government on the local, state and national level.

“We often don’t recognize the sacrifices that are made for us every day, through the government and the military,” said Powell.

“Good government, and those who serve honorably in our government, are gifts from our God,” he said. “I pray that we will remember to thank those that serve and that we are stirred as Christians to live our lives as better citizens.”

During the event, a video was presented about the Alabama National Cemetery, which was produced by the Advanced Television Production Class at Thompson High School.

A moving ceremony for those missing in action was performed by the Thompson High School Junior ROTC.

Clem Muck, a member of the Columbiana Ward of the LDS Church, and the organizer of the evening’s events, expressed his thanks to all those that participated in the devotional.

Those that are interested in assisting with the Memorial Day event at the Alabama National Cemetery are encouraged to call 665-9039 for more information.