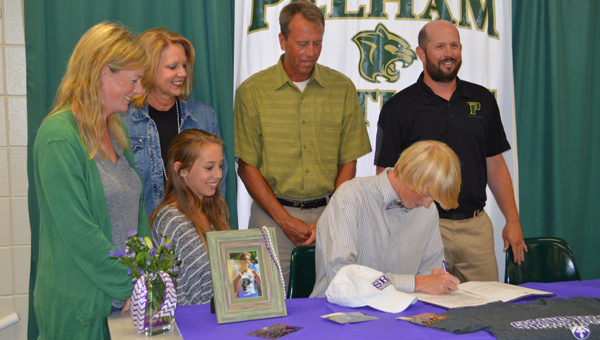 PELHAM—After spending the past five years running track and cross-country for Pelham schools, senior Robbie Letson signed to continue his athletic career at Spring Hill College in Mobile at a May 10 signing ceremony.

The distance runner, frequently competing in events such as the 800-meter and 3,200-meter, said he liked seeing the size of the school and the atmosphere of Spring Hill on the tour. Ultimately though, he attributed his decision to an on-the-spot roster position offer.

“That was a really ‘Wow’ moment there,” Letson said. “I think that’s what kind of sold me there. We took the tour, then we talked (to the coach) and he offered me the roster spot.”

Letson has been running since seventh grade, when he started participating in 5ks and 10ks with his father. He joined the Riverchase Middle School cross-country team in eighth grade and competed in both cross-country and track up to his senior year.

Kiel commented on Letson’s determination to both athletics and academics.

“Spring Hill is lucky to have you participate at their school,” she said. “I can’t thank you enough for all your hard work and dedication over the past four years here at Pelham High School and at Riverchase Middle School.”

Springfield and Argo both said they would miss Letson on the team next year, commenting on his strong leadership even as an underclassman on the team.

It’s a special thing, Springfield said, when an athlete wants to continue running in college and is able to do so.

‘To have someone who wants to follow that and actually gets too is an awesome accomplishment,” Springfield said. “We are very proud.”

Argo said that there is something special about the senior class this year, and she added that each of her students thinks she is going to have a huge breakdown after they graduate.

“What they don’t know is it’s been a little breakdown this whole year,” she said. “I’m really going to miss this whole class because of so many of you, like Robbie. You work so hard, you do what I ask you to do, you set a good example.”

After thanking his coaches, friends and family for their support, Letson explained how blessed he felt to be able to continue running for a college team. As a freshman in high school, he said he didn’t have faith in himself, but he continued to grow as an athlete in the years that followed.

“I just really wanted to keep on in the team aspect in college,” he said. “I think I’m really excited just to be with a new team, and to be able to compete at the next level. Only so many people get to do that, and I’m just blessed enough to be one of those people.”