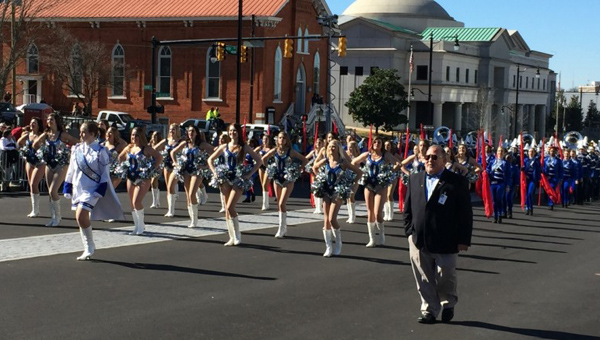 Longtime Chelsea High School Band Director Dane Lawley will mark the end of his career May 13 as he retires from the position he held for many years. (Contributed)

The band performance will follow a special reception at 6:30 p.m. to honor Lawley upon his retirement.

When he started the band program at CHHS, it only had 12 members.

Today, Lawley has the second largest program in Shelby County with almost 190 members.

In 2015, Chelsea had 29 students to qualify for the All-County band program and 14 students who participated in honor bands at the University of Alabama and Auburn.  His bands have performed across the state and nation.

Spates, who was under his instruction from sixth through 12th grade, said Lawley has a way about him that made her want to work hard to do her best.

“Every time we performed––whether on the football field or on stage––if we did not do as well as we could, he did not let us settle for that,” Spates said. “He would push us to be the very best band that we could be. Mr. Lawley takes his job very seriously and in doing that teaches his students not only music but life skills. I learned so much about being motivated, self-discipline and responsibility.”

Spates, who served as drum major from 1996 to 1997, said she never wanted to disappoint Lawley, especially since she knew she would be running laps if she did.

“I will always remember working so hard in the hot sun to prepare for our field shows, but I will also remember that he made it so much fun,” she said. “I was always so proud to be a part of the Chelsea Band. We would always say ‘Hornet Pride’ when our band was called to attention, and to this day when I hear the band say ‘Hornet Pride’ it brings tears to my eyes. This is because Mr. Lawley gave us all something to be proud of. We did have and will always have ‘Hornet Pride.’”

Her thoughts are echoed by current students who praise Lawley for the impact he has made on their lives and on the school itself.

“Mr. Lawley has made a huge impact on my life,”graduating senior Jacob Giles said. “His countless dedication to this band and its members have been greatly appreciated as I would not be the same person without him.”

“Lawley has been with the band for over 30 years,” Elizabeth Hurley added. “His legacy will be remembered for many years to come.”

Student Sarah Roland said Lawley’s influence can be seen in the number of former students who are now concentrating on music as a college major or minor.

Spates was one of those former students who pursued a career in music. As a music teacher, she now finds herself expecting the same excellence from her students as Lawley expected from her when she was a student.

“He taught me how to teach with passion, be committed to my program and love my students. I am forever grateful for the legacy that Dane Lawley has left for his students,” she said. “My life has been forever changed for the better because of his dedication to his job and believing in me.”