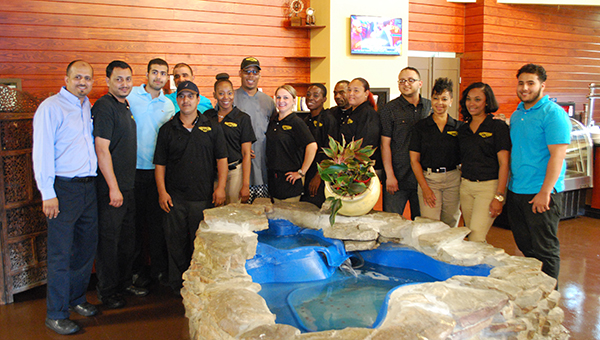 Pictured are the staff members at the soft opening of the Helena American Ranch House location. The restaurant is open seven days a week from 10 a.m. to 9 p.m. (Reporter Photo/Graham Brooks)

HELENA–The American Ranch House in Helena is officially open for business and residents now have another lunch and dinner option and possibly a sit down breakfast spot in the future.

The American Ranch House officially opened on Saturday, May 7 and took over the former Frankie’s Market Café location at 4257 Shelby County 52 and will feature meat ‘n’ three items, as well as American and Mediterranean food.

One step inside the restaurant and it is evident that the American Ranch House team has completely transformed the space.

The former spot where fresh produce was served has now been converted into numerous booths and tables for expanded seating and flat screen TVs for customers to enjoy while dining.

Helena will be the restaurant’s fourth location as the American Ranch House has locations in Vestavia, Tarrant and Five Points South.

“The location in Helena will basically have the same food as the one in Vestavia,” said Obeid. “We will serve lunch and dinner right now but soon we may do brunch where everything is made from scratch. The breakfast is very popular in Vestavia and I’ve already gotten requests from people in Helena asking if we’ll serve breakfast.”

Obeid said the idea to open a new restaurant in Helena came about once Frankie’s closed and him and his team saw an opportunity.

“We were already in the restaurant business and Helena is one of the fastest growing cities in the state so that was a big reason,” said Obeid. “We also want to thank Helena Mayor Mark Hall and the city council for everything they’ve done to help. Our goal is to become a part of the community.”

The Helena Ranch House will be open seven days a week from 10 a.m. to 9 p.m. and will include a rotating buffet menu six days a week as well as a full menu offered full-time.