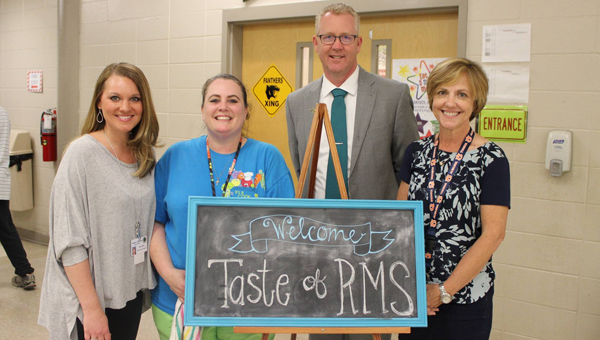 PELHAM— The cafeteria of Riverchase Middle School was filled with savory scents as students explored more than 25 healthy food items at the second annual Taste of RMS event April 28.

Riverchase Middle School’s Child Nutrition Program hosted the event as a part of Every Kid Healthy Week and as a way to celebrate the Actions for Healthy Kids Grant RMS received this year.

“It’s a lot of work, of course, but you can’t say the kids get to participate in things like that a lot,” said Child Nutrition Program Director Grace Perry. “It was fun for (the students), and it was fun for us to see the kids enjoying the food we prepare or can prepare.” 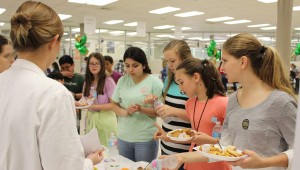 Perry said there were all varieties of fruits and vegetables, breakfast items, entrees and snacks, and all the items were part of a healthy lifestyle.

“It was to promote a healthy school environment,” Perry said. “It was just kind of a fun thing for the kids for Every Kid Healthy Week.”

Education was also an aspect of the event, Perry said. Samford University dietetic interns visited with the students to share tips about healthy eating, and the school nursed discussed hydration.

Overall, Perry said there were about 700 students involved in the event. All students, grades six through eight, participated, and Perry said it was an exciting event for everyone involved.

“We had a great turnout because every student came through. I would say it was very successful,” Perry said. “Participation is a big thing. Not only are we introducing some new foods, but we are seeing what the kids like. It’s kind of a win-win.”

Last year, Perry said they only had one vendor attend the Taste of RMS, and she said she was happy to have expanded to five. She said they plan on hosting the event again next year, and she hopes to make it more elaborate every year.

Thin Mint Spring runners warm up with a Zumba class before starting the race on May 7. (Contributed) FROM STAFF... read more