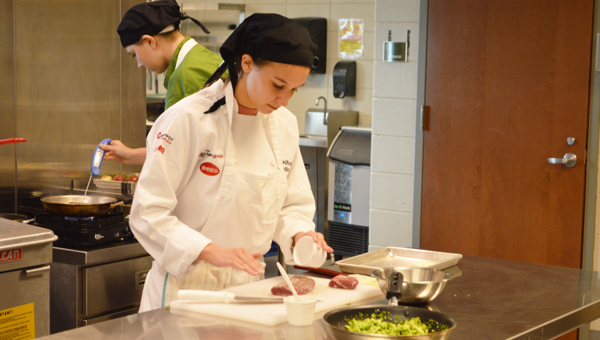 PELHAM— As students in Chef Doug Allen’s Culinary II class stepped into the cooking lab May 10-12, they were greeted by mystery baskets filled with ingredients.

Over a three-day period, Allen tested his students to see if they could apply the skills they learned in Culinary II to a real-world scenario.

“This is just like a restaurant plate, and they present it to the judges just like you would in a dinning room,” Allen said. “They have to put a starch, a vegetable and an protein together to look right: To cook it correctly, to sauce it if it needs it, to make the composition and colors.” 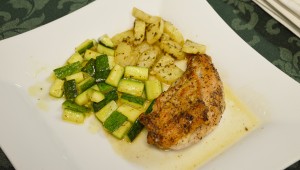 The plates are required to feature one starch, one vegetable and one protein.

From the moment the students began cooking, they had one hour to put together a restaurant-quality dish for three volunteer judges.

Six of Allen’s 17 students were cooking May 10, and he said the other students had already cooked or would be cooking on a different day.

Allen said the mystery ingredients of the day were pork tenderloin, steak, fish and chicken breast, and the students could use any additional items from the kitchen’s pantry to complete their dish.

“We didn’t give them all the same thing,” Allen said. “It was a mystery.”

As the students starting cutting, sautéing, frying and more, Allen circled the room, studying the students’ techniques. He said he was watching for their knife skills, proper use of sanitation and cooking techniques, among others.

“They did very well yesterday,” Allen said. “They had some good-looking plates. There were a couple little missteps, but all-in-all they’re doing pretty good.”

Prior to the Culinary II final, Allen said he provided the students with a practice session the week before and supplied similar proteins. This practice allowed him to work with them and answer their questions.

During the final, the students got straight to work, and weren’t finished until they had formally presented their dishes to the judges. Students were judged on both taste and presentation.