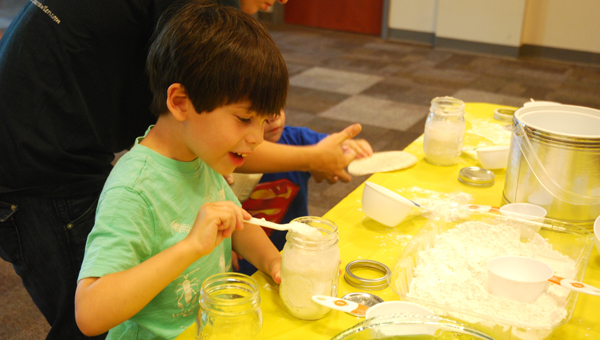 Library scientist Logan mixes together sourdough bread starter during a May 11 Science of Bread program at the North Shelby Library. (Reporter Photo/Molly Davidson)

NORTH SHELBY—Making bread isn’t as simple as following a recipe, there’s a science behind it. On May 11, children experimented and learned the science behind bread at the North Shelby Library.

During the library’s Science of Bread program, children were introduced to yeast, and learned how the tiny living organism makes bread rise. Then, they saw yeast in action by using the scientific method and getting their hands dirty in their own experiments. 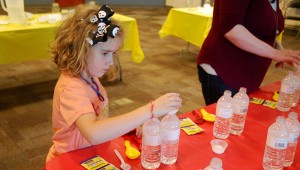 Hannah adds sugar to water in an experiment to see how yeast makes bread rise on May 11. (Reporter Photo/Molly Davidson)

Children started out by examining two types of bread: Sourdough and tortillas. They touched and tasted the bread, then discussed their observations, noting the tortillas were flat while the sourdough was fluffy, porous and soft. Children hypothesized one of the breads must have yeast while the other doesn’t.

Following the scientific method, children put their hypothesis to the test and experimented with yeast. Using a water bottle, balloon and simple ingredients—water, sugar and yeast—children saw how yeast reacts and creates gas, which makes bread rise.

At the end of the program, children mixed their own sourdough bread starter to take home.

The May 11 program was part of the library’s new STEAM initiative. Funded by a grant from the American Library Association and Dollar General, the library’s set of STEAM-focused programs are designed to introduce children of all ages to science, technology, engineering and math in fun, different ways.

“We’re really trying to incorporate science and cool stuff into the library, because you don’t always get that,” North Shelby Library children’s librarian Savannah Kitchens said. “My favorite part about science is it can happen anywhere.”

In addition to the May 11 Science of Bread program, the library has also offered Preschool Kitchen Science, Art in Action and gardening programs.