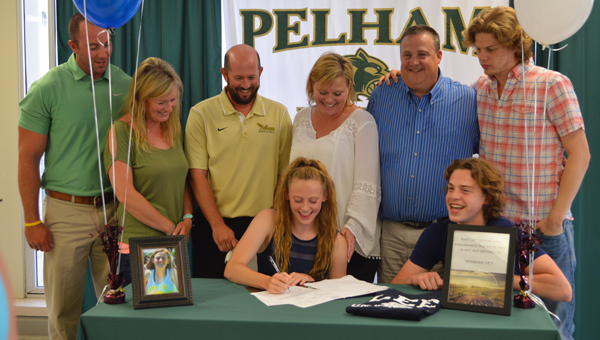 PELHAM— Track coach Jennifer Argo’s first memory of Jordan Allison was when Argo asked this petite girl, with lots of hair and a big smile, to climb into an ice bath.

Allison and her teammate Mary Grace Strozier submerged themselves into the metal tub, and Argo said the two girls laughed and screamed, but both remained determined to stay in the ice water.

Argo shared that story with dozens of Allison’s friends, family members and coaches May 10 in celebration of Allison signing a letter of intent to continue her track career at Lee University in Cleveland, Tenn.

“I was so excited because they were both so young at that point, and I thought this is going to be good,” Argo said. “It has been (good). With Jordan, she always brings that work mentality. She is always going to get out there and do her best, every single day.”

Allison has been running since seventh grade, for six years, and she joined the high school team in eighth grade. In a May 10 interview, before she inked with her university, Allison said she loves being a Panther.

The team is “one big, happy family,” she said, and everyone is supportive of each other. Allison also played volleyball and basketball at PHS, but she said track was a different atmosphere where everyone was close.

“It’s kind of scary and nerve-wracking, but just because we are like a big, happy family,” Allison said of signing with a university. “I don’t want to leave Pelham, but I’m excited. It’s sad, but it feels good to get out and experience life.”

As soon as she toured Lee University, Allison said she knew it was a good fit for her. She said the campus was pretty—not too big or too small—and the school offered her a scholarship.

Allison will compete in both indoor and outdoor track for Lee, and she said she also wants to play volleyball for them, if she can.

PHS Athletic Director Kim Kiel spoke at the ceremony, and said she has some history with Allison on the volleyball court.

“I’ve had the opportunity to see this young lady grow, and I am so proud of you,” Kiel said. “You have done an amazing job. You have been a tremendous leader. You are tirelessly working hard endlessly at everything that you do, and there is no doubt in my mind that you have a bright future ahead of you.”

Head coach Marty Springfield echoed Kiel and Argo’s comments related to Allison’s hard work and dedication to everything she did at PHS.

Being an all around athlete, Springfield said Allison made him a better coach. He added that playing volleyball and basketball also made Allison a better runner.

“We are obviously very proud of Jordan and that she was able to earn this achievement,” he said. “One thing that I have always appreciated about Jordan is she brings an athlete mentality out to track, which a lot of times we don’t get. She is a great competitor.”