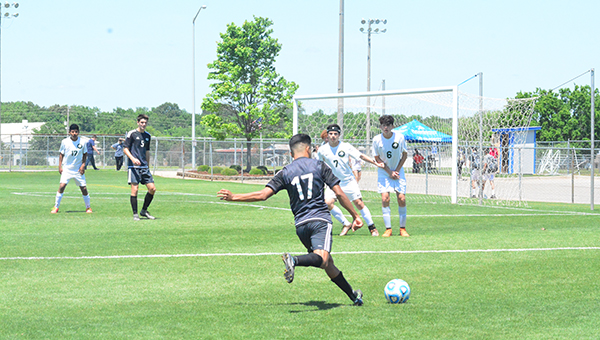 The Cullman Bearcats defeated Pelham 2-0 on Friday, May 13 in a 6A semifinals matchup at Huntsville’s John Hunt Soccer Complex. (Reporter Photo/Graham Brooks)

HUNTSVILLE–The Pelham Panthers quest for a 6A soccer state title fell short on Friday, May 13 in a semifinals match against Cullman, as the Bearcats scored a goal in each half to win 2-0.

Cullman’s Benjamin Walker broke the scoreless contest in the 29th minute to put the Bearcats ahead 1-0.

In the first half, Cullman was able to record seven shots on goal, whereas Pelham recorded just one.

Pelham attempted to rally and tie the match in the second half as the Panthers recorded five corner kicks in total but failed to put the ball in the back of the net.

Cullman iced the match late in the second half when Bearcats midfielder Guilherme Albuquerque broke free and scored a goal in the 74th minute to help send Cullman to the 6A State Championship. The Bearcats are attempting to capture their first state championship since 2002.

Despite the loss, this was the second consecutive season Pelham has made it to the 6A Final Four and Panthers head coach Patrick McDonald likes the direction the program is headed.

“The dedication the boys have and what we just said to them, there’s 60 other teams that were dying to be in their position and I know they’re very upset for not progressing to the final after being here but this was a successful year,” said McDonald. “It proved that we belong and going two years in a row, it’s a testament to the determination of the kids. Even being youthful this year, we still had some experience and I’m excited for the future of our program.”

Pelham finished the 2016 season with a record of 16-10-2 and graduate just three seniors from this year’s roster.

Helena Midfielder Juli Tatum was named the NSCAA and MaxPreps High School State Player of the Week for May 2-8.... read more