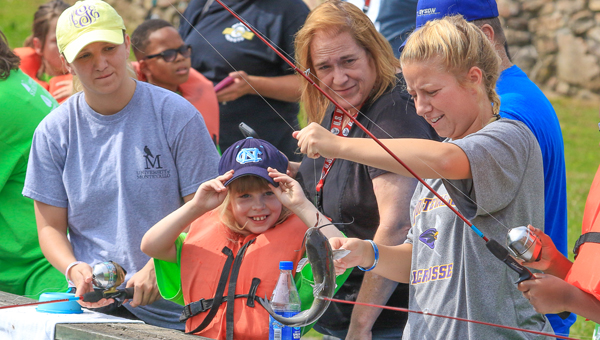 The Gone Fishin’, Not Just Wishin’ Exceptional Anglers gives students with disabilities the opportunity to fish with volunteers at Oak Mountain State Park. (For the Reporter/Dawn Harrison)

PELHAM— Smiles were wide and eyes were bright as students from all over Shelby and Jefferson counties leaned over the rail of a pier, watching a baited hook bob up and down in the lake at Oak Mountain State Park.

Volunteers from several organizations helped students pull the wriggling catfish over the side of the pier. Overwhelmed with excitement, the kids laughed as they posed with their day’s catch.

The scene played out similarly for each of the 1,200 kids who participated in the five-day Exceptional Anglers Gone Fishin’, Not Just Wishin’ event for students with disabilities.

“You just have to see it to believe it; they are just so excited,” said Wanda Westbrook, an adapted physical education teacher and one of the event coordinators. “Most of them are a little squeamish about touching it or anything, but you will hear them squeal, and the adults with them get just as excited.” 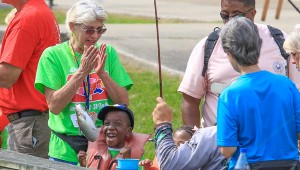 Students cheer and smile wide as they reel in their catch of the day.

The Exceptional Anglers fishing event started 22 years ago on a much smaller scale, according to Westbrook. Treva Artimisi, the other event coordinator, came up with the idea as a way to get the students with disabilities out and active.

As adapted P.E. teachers, Westbrook and Artimisi aimed to teach functional recreational and leisure skills to their students. Rather than sitting on a couch, Westbrook said they’ve been pushing to teach physical activites, such as T-ball and softball.

Those sports are often offered through the community, and Westbrook said they want to get the students involved, or at least exposed, to mainstream activities. Fishing was one of said activities.

“We love to fish, and we thought this is something families might not consider because a lot of these kids have significant disabilities of some type,” Westbrook said. “But when they came out here, they said, ‘Well, we can fish. We can go to Oak Mountain.’ I think we feel better about that part than anything else.”

Corporate sponsors donate money to purchase fish for a blocked off portion of the lake, and volunteers spend the day helping the kids fish.

“The kids love it,” Westbrook said. “They are getting to work with volunteers that, obviously, care enough to spend time with them, talk to them. That’s part of our goal too—we work with socialization.”

While students may be comfortable with the people they are around every day, Westbrook said talking to a child helps develop speech, language and social skills.

In addition to fishing, all the students have conservation and recycling themed crafts to participate in, and each of the students receives a photo from volunteer photographers to take home.

“I love seeing the kids have a good time and seeing the adults—the volunteers,” Westbrook said. “A lot of them have come out for years and years. They are so loyal because they love it so much.”