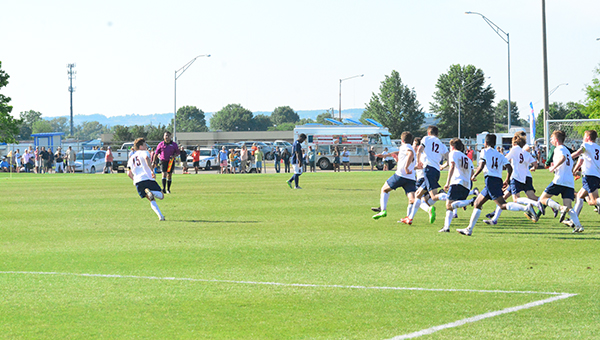 The Oak Mountain bench chases Christian Thomason (15) after scoring the deciding penalty kick goal against Huntsville on Friday, May 13. The Eagles will play for the 7A state championship game on May 14. (Reporter Photo/Graham Brooks)

HUNTSVILLE–For a brief moment, it looked as though the Oak Mountain Eagles streak of making it to a sixth straight state final game was in jeopardy, but the Eagles fought through the adversity for a gritty win over Huntsville after defeating the Panthers 2-1 and a 5-3 edge in penalty kicks after time expired in double overtime.

With the win over Huntsville, Oak Mountain set a single-season school record with 27 wins and remain undefeated on the season at 27-0-2 heading into the state championship game.

Oak Mountain head coach Daniel DeMasters admitted it wasn’t his team’s best performance this season, but it was enough to get the job done.

“We’ve been working hard and mentally preparing that the playoffs were going to bring games like this,” said DeMasters. “We didn’t play our best game, kind of putting it out there but in the end we had this motto ‘just finish strong’ and I told these guys we just got to execute when it matters. We couldn’t do it for the first 80 to 90 minutes but we did it in the end when we needed it. It’s just a blessing to be back and it’s a lot of hard work that these kids put in.”

It was the Eagles who got on the scoreboard first after Charles Jeter put one in the back of the net at the eight-minute mark off an assist from Landon White.

Huntsville managed to tie the game later in the first half after Jack Arey scored a goal in the 22nd minute of play.

Both teams were evenly matched and didn’t get many shots on goal opportunities as Huntsville finished with four shots on goal, while Oak Mountain recorded six.

Ultimately, the match was decided on penalty kicks and Oak Mountain celebrated wildly and also breathed a sigh of relief after Oak Mountain’s Christian Thomason put the decisive penalty kick in the back of the net.

When asked what sets this Oak Mountain team apart from other, DeMasters said it’s a combination of talent and team chemistry.

“It so cliché but this group of guys is so close knitted,” said DeMasters. “Arm-in-arm, hand-in-hand from the very first day there’s not really people that hate each other and that sort of thing. That stuff goes a very long way but we’re very talented as well so that helps. I think it’s that balance of being so talented and wanting to work for each other is just the key ingredient that doesn’t come around too often.”

The Eagles are eyeing their sixth state championship in school history as well as back-to-back state titles and they will have a chance to reach that milestone on Saturday, May 14 against McGill-Toolen.

Oak Mountain and McGill-Toolen will battle for the 7A state championship at 12:30 p.m. at Huntsville’s John Hunt Soccer Complex.

The Cullman Bearcats defeated Pelham 2-0 on Friday, May 13 in a 6A semifinals matchup at Huntsville’s John Hunt Soccer... read more