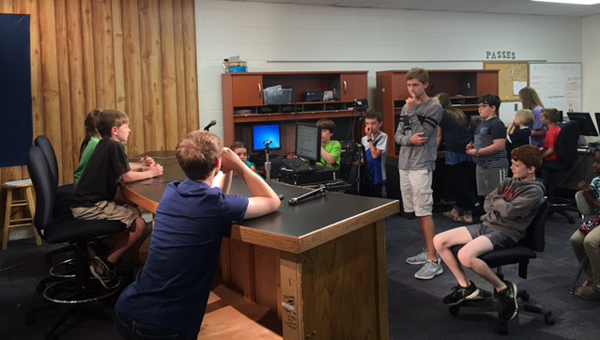 The students first got to know each other, then set to planning. The middle schoolers guided the elementary school students in developing, producing and editing a news broadcast to be shown to all OMES students.

Students broke up into groups and began brainstorming ideas, which lead to creating a storyboard. From there, the students began interviewing various people around the school and filming stories they were interested in and felt others would gain insight from.

Through the hands-on and engaging project, students learned about microphones and how to use cameras.

Once filming and interviews were complete, the elementary students visited OMMS to work in the OMMS news studio and learn how to edit.

While the OMES students learned about the process to create a news broadcast, the OMMS students had an opportunity to be leaders and mentors to the younger students.

The students will get together one more time to see their work at a “red carpet premiere.”

The Shelby County School System recognized outstanding educational support professionals of the year during a ceremony on May 5. (Contributed)... read more