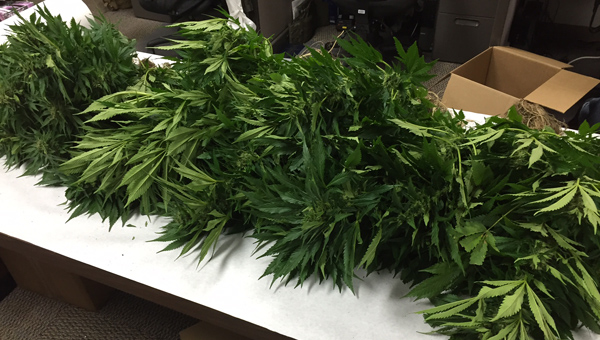 The Shelby County Drug Enforcement Task Force intercepted a small outdoor marijuana grow worth $18,000 in Shelby on May 13. (Contributed)

“Our investigators received tips from the community of South Shelby, which resulted in the interception of a small outdoor marijuana grow,” SCDETF Commander Lt. Clay Hammac wrote in a May 13 email. “According to the weight, the value of these plants are estimated at $18,000. An investigation is ongoing to look into the origins of these plants, which appear to have been harvested for several years.”

Hammac said the SCDETF discovered the marijuana grow on the morning of May 13, and hopes to conclude the investigation soon and release more information once the suspects have been identified and charged.

Trafficking marijuana is a Class A felony, Hammac said.

Hammac commended the citizens who submitted tips to the SCDETF.

“We are grateful to the citizens who chose to alert the Sheriff’s Office about the grow, and value the partnership with a proactive and vigilant community,” he said. “In order for us to address the drug challenges, abuse and addiction, we have to have that partnership with the local residents, and we’re grateful for that.”