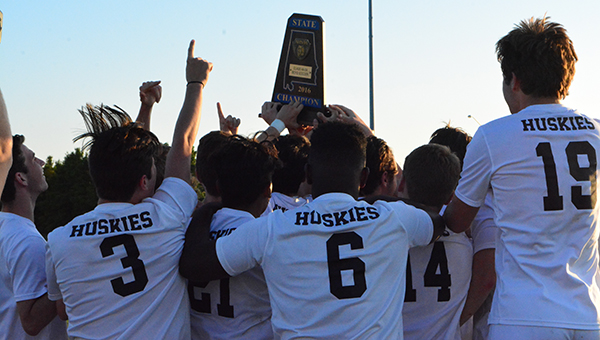 HUNTSVILLE–Hugs, tears and celebration was the scene at the John Hunt Soccer Complex on May 13 as the seconds ticked off the clock to secure Helena’s first soccer state championship in program history, defeating Randolph by a score of 4-0.

The Huskies set a goal before the 2016 season, and that was to make it back to Huntsville and capture a 4A-5A state championship that eluded them one-year prior, and they did just that.

The heavy senior filled roster went out on top as Helena scored two goals in the first half and two in the second half to cruise to a 4-0 victory.

Senior captain Jeremy Hughes has helped lead the Huskies all season and he called the win “surreal” after capturing the state championship.

“It’s so surreal, it’s the best feeling I’ve felt in my whole life,” said Hughes. “It’s the craziest thing to feel this and overcome such a huge obstacle and bounce back from what happened last year. I couldn’t be more grateful to have such a great team and such great coaching and it’s amazing to do this in your last year of your high school career. It’s just the most special thing you can have happen to you.”

Helena got on the scoreboard early and never looked back.

The Huskies first goal came in the 30th minute of the first half after senior Yeltsin Canales put it in the back of the net.

Five minutes later, Helena freshman midfielder Vincent Navaez scored his first of two goals in the game to give Helena a 2-0 halftime lead.

The Huskies didn’t let up in the second half, as Navaez scored a second goal and Michael Humphrey added the exclamation point in the 73rd minute to push the lead to 4-0 to capture the state championship. Navaez was named the MVP after recording two goals in the game.

Helena head coach Zach Morgan credited his team’s willingness to meet their goals and leadership as key ingredients for their success in 2016.

“The thing is, when they set goals they also have to participate in making the goal happen and I think that’s the biggest thing that I saw,” said Morgan. “They were willing to put in the work and do all the things that need to be done to get back here and do what they needed to do and that’s the difference from last year. We have a lot of leadership and they’re willing to help each other out and willing to talk to other players when they need to be talked to to boost them up and help them out. There was no negative talk on this team.”

The 2016 Helena boys soccer team made school history with the win. The state championship was the school’s first team state title since the school opened in 2014.