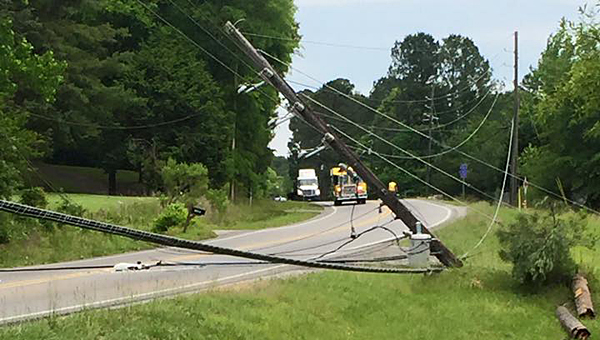 A May 16 wreck caused power lines to fall across Alabama 119 south of its intersection with Fulton Springs Road. (Contributed)

ALABASTER – Alabama 119 reopened at about 7 p.m. on May 16 after a vehicle crash downed power lines and closed the road for several hours in both directions.

The wreck happened shortly before 2 p.m. and damaged a power pole along the side of the road, causing power lines to fall across the heavily traveled highway.

Crews began working to clear the power lines shortly after the wreck, and the roadway remained closed between Fulton Springs Road and Butler Road for about five hours.

“Officers are addressing the traffic issues as best as we can in this area,” read an Alabaster Police Department statement issued at about 4 p.m. “Please avoid the area, if at all possible.”

No injuries were reported in the wreck, and the roadway reopened to traffic at about 7 p.m.