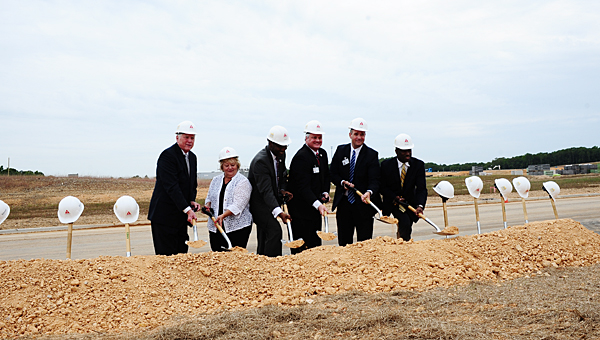 Alabaster School Board members hold a ceremonial groundbreaking ceremony at the site of the city’s upcoming new high school on May 16. (Reporter Photo/Neal Wagner)

ALABASTER – Several weeks after crews began working to construct the main academic building and infrastructure of Alabaster’s new high school, a group of people who helped bring the project to fruition gathered to celebrate at the site on May 16.

About 50 school, city and state leaders joined members of the Alabaster superintendent’s advisory committee – students who provided input on the new facility – at the school location off Thompson Road for a ceremonial groundbreaking event just off one of the site’s newly paved roads.

It is definitely a great day to be a Warrior today. I am so excited,” Alabaster School Superintendent Dr. Wayne Vickers said. “The groundbreaking is symbolic of the collaboration among our community leaders and our Board of Education to provide a new high school for the students of Alabaster.

“In three short years, our school system has gone from infancy to fully operational with plans for this beautiful new facility which is already being constructed in the area surrounding us,” Vickers added. “This brings us one step closer to the day when our entire community will be able to join us here to officially cut the ribbon on the new home of the Warriors.”

Once completed, the new school will look like this. (File)

In January, the city’s Board of Education voted to accept a $43.4 million bid from the Birmingham-based Argo Building Company for phase one of the project. Phase one consists of construction of the main academic building, which will include the cafeteria, media center, special education facility and space for the school’s career technical program.

The main building will be a little more than 234,000 square feet, and is being constructed on a portion of school-owned land between Kent Dairy Road and Thompson Road.

Crews have already paved many of the site’s roads, have begun pouring the building’s foundation and have begun constructing walls on the site.

The new school’s football stadium and athletic complex, fine arts center and indoor sports facilities will be bid at a later date. The main academic building is scheduled to open in fall 2017.

Once the entire project is completed, the school facilities will be about 385,000 square feet, will initially be built to house 2,000 students and will be constructed with future expansions in mind, Vickers said previously.

“It’s been three years since the idea of an Alabaster City School System was first floated, and we’re finally here to one of the things I know was a hope and a promise that we had to really move us forward,” said Alabaster School Board President Adam Moseley.

Local public school systems say they are still working to determine how a recent school guidance on restroom and locker... read more