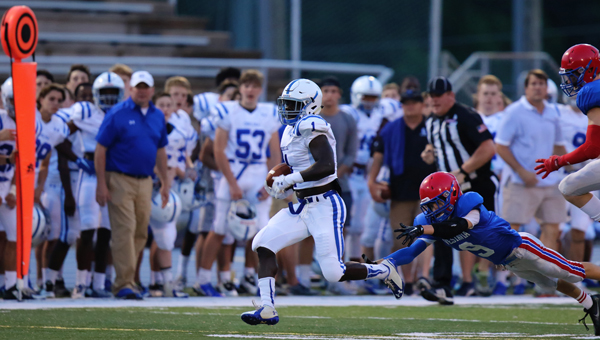 Chelsea’s Zalon Reynolds avoids a Vestavia Hills defender during the Hornets’ spring game with the Rebels on May 12. (Contributed / Cari Dean)

VESTAVIA – Football is back. At least for a moment. As the spring practice season winds up for teams across the county and state, the vast majority of coaches are taking advantage of the opportunity to get an early glimpse at what their on-field products will be in the fall by way of spring games. Chelsea was among the first of the county schools to have its spring game, as the Hornets traveled to Vestavia Hills on May 12 to take on the 7A Rebels.

Chelsea, which ended the 2015 season with a 7-4 record and a playoff appearance for the first time since 2011, returns rising senior quarterback Matt Marquet, rising senior running back Zalon Reynolds and rising senior wide out Jay Vickers to the offense, while the defense will have to replace its entire linebacking corps and a number of secondary players as well heading into the fall. After the starters played a tight first half, Vestavia’s reserves pulled away from Chelsea’s in the second half, and the Hornets lost 30-13 in a game that was called early due to lightning.

“In the spring you want to see how guys have progressed in the offseason as far as strength and speed,” Chelsea head coach Chris Elmore said. “Obviously the big thing is getting guys who didn’t play last year some game experience, some live action. But the number one thing is coming away injury-free, which we did for the most part.”

In the first half of the game, Chelsea held Vestavia to a field goal after the Rebels started a nice drive, and those three points were the only ones scored in the first quarter. The Rebels scored again with less than seven minutes left in the half after Chelsea fumbled deep in its own territory, setting up a Vestavia touchdown pass and giving the Rebels a 10-0 lead.

The final seven minutes of the half were exciting, as Reynolds scampered 68 yards for a score on Chelsea’s next drive, tightening the score back to three at 10-7. However, Vestavia scored again quickly after, pushing the lead back to 17-7.

On Chelsea’s next drive, the Hornets used a big run from rising senior Austin Stallworth as well as a pair of catches from Vickers to quickly move down the field, and Marquet put the finishing touches on the drive, scoring from two yards out to bring the score back to 17-13.

“We’ve got a lot of guys back on offense, eight of our 11 starters were full-time last year and the other three played quite a bit,” Elmore said. “With that experience we wanted to be a little more polished than most teams are at this point in the year, and I think we were for the most part. We had a few botched plays, but that’s also why you play the spring game.”

In the second half, Vestavia scored twice before the game was called due to lightning with less than 12 minutes left in the fourth quarter.

“The only disappointing thing was it got cut short and we didn’t get to get all the kids in,” Elmore said. “We wanted to get those guys in, that’s disappointing. But you can’t control the weather.”

Chelsea’s first regular season game this season will take place on Aug. 19 when the Hornets travel to Oak Mountain. The first home game on the schedule is slated for the next week, when Chelsea will host Briarwood.

Knights fall to Bayside in shootout

William Moore and the Westminster School at Oak Mountain Knights lost to Bayside Academy in a shootout in the 1A-3A... read more