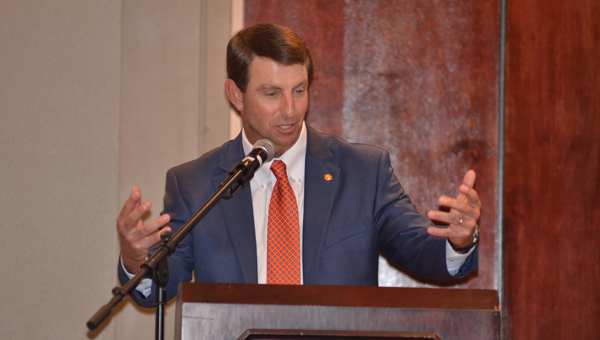 PELHAM— When Clemson University’s head football coach and Pelham native, Dabo Swinney, took the podium at the Making Miracles Luncheon at the Pelham Civic Complex May 16, he talked about all aspects of his life.

The Pelham High School grad discussed his pride in growing up a Panther, as well as his coaching philosophy at Clemson and the lessons he’s learned through the game of football.

The luncheon, hosted by Miss Shelby County Hayley Barber, was held to raise funds for Children’s Miracle Network, an organization Swinney said was close to his own heart.

He explained that his mother spent most of her first 10 years in the crippled children’s hospital, which had a direct impact on his life. Swinney also spent about two weeks there when he was in the third grade.

“I’ve experienced it myself personally, but indirectly through my mom, so I am a poster child for the Children’s Miracle Network, Children’s Hospital,” Swinney said. “That’s why I said this is a way for me to give back to them.”

What Swinney calls the “simplest, most powerful, greatest success model of all time” is a philosophy he follows in the Clemson football program: Love, serve, care. He said true success is not making something happen for you; it’s about making things happen for others.

“That is what today is about,” Swinney said of the Making Miracles Luncheon. “Today is about serving the community. I am here to serve this community, to give back to this great hometown I am from— a wonderful place to grow up— and to hopefully make a difference for people I may never meet.”

As Swinney looked around the banquet hall of the Pelham Civic Complex, he pointed out former teachers, current friends and the people who made an impact on his life. He said Pelham is where he met his wife, developed his work ethic and received a great education.

He added that he wants the young people in Pelham to see him and be encouraged about being from Pelham, knowing they will grow up equipped and prepared to be successful in life.

“It’s been a blessing. I take great, great pride in telling people where I am from, and I also take pride in trying to represent my hometown in a positive way,” Swinney said. “It’s important and I know it means a lot to a lot of people.”

The most important lessons in his life, Swinney attributes to football. He said the game teaches discipline, toughness, structure, confidence, how to set a goal and pay the price for something, how to win and lose with class, how to be a great teammate and more.

For Swinney, the journey from student to football player to coach all started in Pelham.

“It all happened right here, and it’s been quite a journey my 46 years,” Swinney said. “Especially when I left Pelham in 1988. I think back on it some times, my 46 years, and man, there have been some long, long days, but the years have been really short.”

A two-vehicle wreck on Old U.S. 280 at Narrows Drive blocked one lane of traffic for nearly two hours on... read more