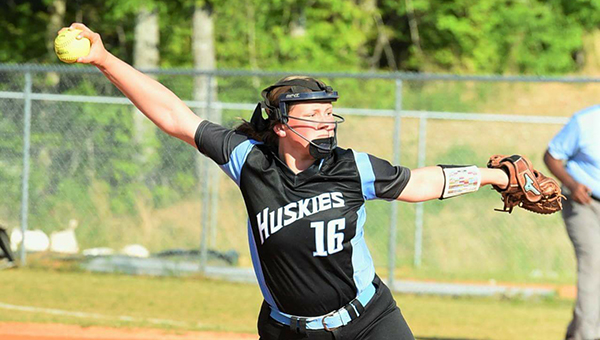 Helena starting pitcher Avery Barnett (16) pitched two complete games at the South Central Regional Tournament to held lead the Huskies to a berth in the state tournament. (For the Reporter/Stephen Schumacher)

MONTGOMERY–The Helena Lady Huskies softball team went 3-1 in the AHSAA 5A South Central Regional Tournament May 12-13, to qualify for the 5A State Softball Tournament beginning May 18 in Montgomery.

The Lady Huskies took down Dallas County 16-1 and Shelby County 12-2 to advance to the final game in the winners’ bracket against Marbury. Helena lost to Marbury 2-0 but rebounded to defeat Demopolis 3-1 to qualify for the state tournament.

Helena had no problem taking care of Dallas County in the first round of the regional tournament as the Lady Huskies collected 14 hits in four innings totaling 16 runs in the rout.

Helena starting pitcher Katie Lively was dominant in the circle as well as at the plate to lead the Lady Huskies.

Lively collected three extra-base hits to finish with three doubles and three RBIs in the game. Lively struck out eight and allowed one earned run on two hits and no walks over four innings.

Helena’s Jordan Ingram was also stellar at the plate, finishing with four RBIs.

In round two of the regional tournament, Helena met Shelby County and once again had a stellar offensive performance to defeat the Lady Wildcats 12-2 in five innings.

Helena scored 10 runs in the first three innings to put the game away early.

A passed ball, a two-run single by Mackenzie Wilson, a two-run double by Maggie Blanton and a sacrifice by Avery Barnett gave the Lady Huskies a 6-0 lead after the first inning.

Wilson went a perfect 3-3 at the plate highlighted by a solo homerun in the bottom of the third inning to lead Helena offensively.

Helena starting pitcher Avery Barnett collected 10 strikeouts and allowed just three hits and one walk over five innings in the win for Helena.

Helena’s final two runs in the game came in the bottom of the fourth inning after a sacrifice fly scored Wilson, followed by Tamar Watts’ single to score Chaney Handley.

The winners’ bracket championship game featured Helena and Marbury to see which team would qualify first for the state tournament.

Helena had no answer for Marbury starting pitcher Layton Murphy who pitched seven shutout innings, allowing no walks and surrendered just three hits in the win.

Marbury scored one run on an RBI single by Loren Ross in the third inning to grab a 1-0 lead.

Marbury’s Kenzie Berry homered to centerfield in the bottom of the fifth inning to extend the lead to 2-0, a lead that they never surrendered.

Helena and Demopolis faced off in a deciding qualifier game in the losers’ bracket on May 13 and the Lady Huskies got the best of Demopolis, winning 3-1 to advance to the state tournament.

Ahead 3-0 heading into the final inning, Helena needed to record three more outs to punch its ticket to Montgomery.

After recording the first out, Demopolis hit a single and double to put runners at second and third with one out.

An error on Helena allowed Demopolis to score a run, but Helena starting pitcher Avery Barnett came through with a strikeout and a groundout to end the game and the comeback threat by Demopolis.

The Lady Huskies scored two runs in the fourth inning on a fielder’s choice and an RBI single by Mekhi Mayfield.

Helena will face Etowah on May 18 in the first round of the Class 5A state tournament. The two teams will meet at Montgomery’s Lagoon Park at 10:30 a.m.