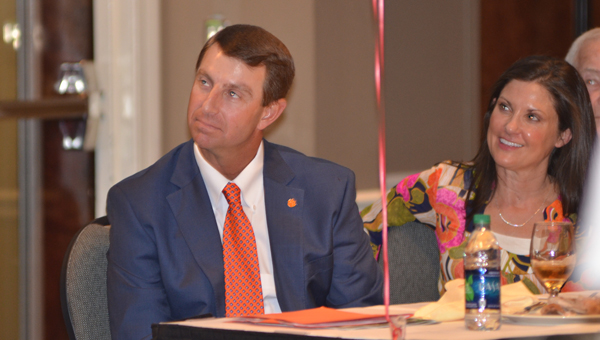 The Pelham City Council declared May 17, 2016, as Dabo Swinney Day to celebrate the accomplishments of the Pelham High School graduate. (Reporter photo/Jessa Pease)

PELHAM— After hometown hero Dabo Swinney returned to Pelham, the Pelham City Council took the opportunity to honor the Clemson University head football coach by declaring May 17, 2016, as Dabo Swinney Day at its May 16 meeting.

Swinney, who had returned to Pelham to speak at the Making Miracles Luncheon and participate in an alumni flag-football game, is a graduate of Pelham High School who went on to play for the University of Alabama.

“It was a great event today…Dabo kind of brought the house down,” City Council President Rick Hayes said of the May 16 luncheon. “He not only came and had a lot of insightful things to say…but he also had everyone dying laughing and everyone carrying on.”

While at Alabama, where Swinney earned his undergraduate and master’s degree, he was a member of the undefeated 1992 National Championship football team before he began his football career there.

According to the resolution, which was unanimously passed by the Pelham City Council, Swinney “has led the Clemson Tigers football team to an elite status,” noting two ACC championships and the team’s participation in the 2016 National Championship game.

“Above everything he does, we just sincerely appreciate him always being just a good ole boy from Pelham, Ala.,” Hayes said. “He said that in his post-game interview in one of the major football wins that he had, and I will never forget that. It will stay with me forever, because the pride I felt for Pelham when he did that was very substantial.”

“Dabo’s road to success was not an easy one, but has always been rooted in humility, faith, a strong work ethic and an unbelievably positive attitude,” the resolution read. “Dabo’s success has provided very positive recognition for the city of Pelham and pride for his hometown…Dabo serves as a great role model for students in Pelham and around our country.”