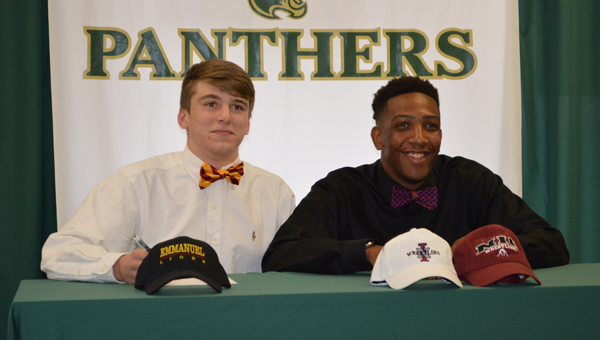 PELHAM— After making it to the state championship round of the 6A wrestling tournament, Pelham High School’s Hasaan Hawthorne and Dillon Turner both inked with colleges during a May 16 signing ceremony.

Hawthorne, who completed the season with a 37-0 record and was named 6A MVP at the state meet, signed with North Idaho College. Turner, who finished the season 30-1, committed to Emmanuel College.

“Tonight is a very special night,” said coach Eric Pollard. “We are very honored and privileged to have not one but two young men who will continue at the college level.”

Hawthorne attributed his decision to the full-ride scholarship North Idaho offered him, and he said the college fought hard to get him. When other colleges may have lost contact, Hawthorne said North Idaho continued to pursue him.

The college also made a connection with his family, which he said was important to him. Overall, it seemed like a good fit.

“I’m feeling a little nervous,” Hawthorne admitted in a May 16 interview. “I feel like I’m signing my life away, but that’s a good thing.”

Turner said he made a great connection with the coach at Emmanuel College, and he instantly felt at home on the campus. It was a good fit for him, he said, and he’s looking forward to training for competition.

“I was kind of anxious,” Turner said of signing with his college. “But once it was all over, I was really happy. It’s an incredible feeling.”

Both boys started wrestling together six years ago, in seventh grade, and both said they would miss Pelham. The people in the wrestling program were close, Turner said, which is what he will miss most about it.

“(I’ll miss) the community, the school, the people,” Hawthorne said. “I love everything about Pelham. I’m not ready to leave, even now.”

The boys each thanked their family and friends for support, and made sure to recognize each of the coaches who contributed to their success. Without the support of the PHS community, Hawthorne and Turner said they wouldn’t be able to continue their wrestling careers.