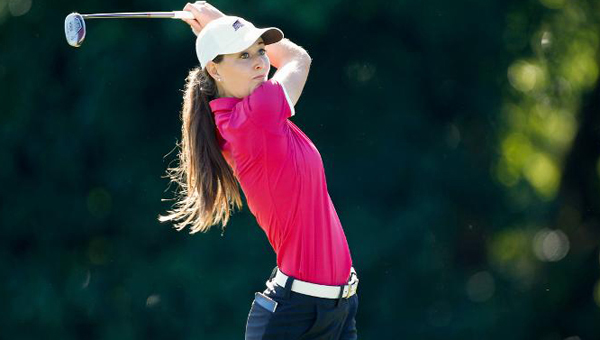 The University of Montevallo’s Elaine Wood qualified for the Division II National Golf Championship after shooting a 222 at the South Super Regional. (Contributed)

AURORA, Colo. – While the school year is over at the University of Montevallo, Elaine Wood’s golf season still has some life left. Wood, who recently finished her junior year at Montevallo, was one of three individual qualifiers from the Division II South Super Regional Tournament, which means Wood will play in the Division II Women’s Golf National Championship, which will take place from May 18-21 at the CommonGround Golf Course in Aurora, Colo.

Montevallo was one of 12 teams to take part in the South Super Regional, which had each of the top five Division II programs as ranked by Golfstat participating in it, including the Lady Falcons. The South Super Regional is comprised of Division II schools from North and South Carolina, Alabama, Florida, Tennessee and Mississippi. After finishing the first day of the regional tournament in fifth place with a cumulative score of 302, Montevallo was never able to squeeze into the top three to snag a qualifying team bid to the national championship, as the Lady Falcons finished the regional tournament in fifth place, which was still the best finish in the history of the program.

“A lot of the top schools from the country are all in our region,” Wood said. “All the teams in our region are very strong, it’s very tough. But I think next year we’ll be ready.”

Wood shot a 75 on the first day of the South Super Regional tournament, a 73 the second day and a 74 on the final day to finish the tournament with a six-over 222. That score was good enough to place her in a tie for fifth-place overall, however Wood finished as one of the top three individual finishers not associated with an advancing team, behind Felicia Leftinger of Florida Tech and Paloma Vaccaro of West Florida, which punched her ticket to the National Tournament.

“I really wanted us to make it as a team, I wanted us to be going as a team,” Wood said. “We’ve had a record-book year. I’m proud of our girls, we’ve turned everything around, and I think next year is definitely going to be our year. But I’m excited that I still get the opportunity to play for the school for a while longer.”

Wood joins Emily Gibson as the only women’s golfer in the history of Montevallo to qualify for the national championship, and is just the sixth women’s golfer in the history of the Peach Belt Conference to qualify as well. She will headline the 2016-17 Montevallo golf team that returns every member of this season’s team, as the Lady Falcons make a bid to reach the national tournament.

As far as what Wood hopes to do at the national championship, her goal is fairly simple.