This spring brings some exciting performances to the Shelby County Arts Council (SCAC). Returning favorites Emily Herring and Gabriel Tajeu are back and ready to share some new music with Shelby County.

On April 23, multi-talented performer Herring returns to the Black Box Theater stage for her spectacular tribute to country legend Patsy Cline. As a veteran of the stage in both regional theater and national tours, Herring has always been a fan favorite at the Shelby County Arts Council.

Since performing as Patsy Cline in the musical theater production of “Always…Patsy Cline”in Birmingham in 2011, Herring has been asked numerous times to reprise the role in other venues. “I am so grateful to be returning to the SCAC,” Herring says. “This community is one of my favorites to sing for…especially my Patsy Cline show.”

When she isn’t donning the red dress and boots of Patsy Cline, you can find Herring singing with the Birmingham based jazz band, Just Friends, and working on upcoming cabaret shows in Birmingham and New York. One of her most recent performances was several roles in the pre-Broadway workshop and world premier of “The Countess of Storyville” at the University of Alabama. Residents can see her April 23 at her Shelby County Arts Council performance as Patsy Cline. Doors open at 7 p.m., and the performance begins at 7:30 p.m. Tickets are $20 and include a pre-show beverage reception.

Local favorite Gabriel Tajeu will also return in April for his new album release party for the folks of Shelby County. With the release of his second album, Tajeu is excited to share with fans new ideas he has been tossing around. 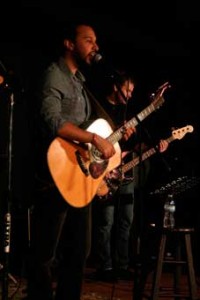 Gabriel Tajeu will perform at the Black Box Theater for his album release party and show.

“I’ve grown during the years, had new experiences and been excited by more soul and rock music, so it made sense to make this record,” Tajeu says. “I also wanted to give my fans something new to listen to but still familiar.”

Tajeu had the opportunity to record part of his record at Muscle Shoals legendary FAME Studios with engineer John Gifford III. Besides recording and sparking interest in the new album, Tajeu has been busy playing gigs around Birmingham such as Workplay, The Nick and The Syndicate Lounge, and he is looking forward to working on new material during the summer.

“The Japanese record label, Sweet Soul Records, that distributed my first record is picking up the second record too and is very excited about the record,” Tajeu says. “It’s amazing to know that people all over the world are listening to the music being made right here.”

Join Tajeu April 30 at the Black Box Theater for his album release party and show. Opening for Tajeu will be husband and wife folk duo The Matchcoats. Doors open at 7 p.m., and the performance starts at 7:30 p.m. Tickets are $20 and include a pre-show beverage reception.

To purchase tickets and find out more information on this and other events, visit Shelbycountyartscouncil.com and like them on Facebook.

Hashtags From the Heart

Calera schools are bringing positive attention to the accomplishments of its students, teachers and faculty with social media hashtags. Calera... read more