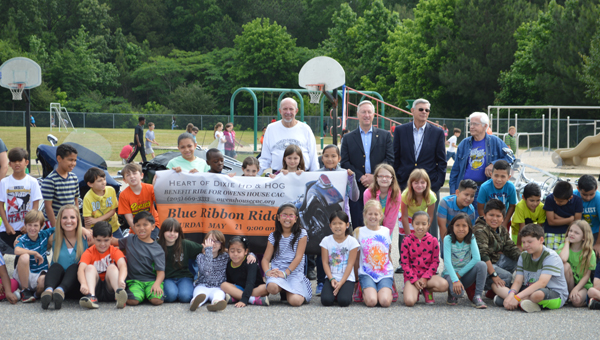 The Heart of Dixie Hog Group visits with the students of Valley Intermediate School to celebrate their joint support of Owens House. (Reporter photo/Jessa Pease)

PELHAM— The Heart of Dixie Hog Group revved up their motorcycles May 17 for a special visit to Valley Intermediate School as a way to celebrate their collaborative efforts to support Owens House.

Back in the fall, the students of VIS collected money during the school’s Auburn and Alabama Games. The money was donated to Owens House through the Hog Group for the annual Blue Ribbon Ride, which also supports the charity.

“It was great for me because the students are actually getting to see what their money is going towards,” said VIS principal Robin Hollingsworth. “A lot of times, like when they bring Pennies for Patients, they know what the event is, but they don’t really get to see any kind of culminating activity that ties it all together. I think that meant a lot to them.”

The members of the Hog Group lined up with their motorcycles outside VIS May 17, and high-fived all the students as they ran out to get a glimpse of the bikes.

Holly Laney, coordinator and fifth grade teacher at VIS, said the kids were excited to see all the riders and bikes. Laney’s father, Mickey Stevens, is the director of the Hog Group, and she said the idea for the joint project unfolded at the dinner table.

She said Owens House supports VIS by visiting the school and giving presentations, so when she learned the Owens House was also the Hog Group’s main charity, she said she jumped at the opportunity.

“(I thought) that would be an awesome opportunity for the two groups to work together to benefit one cause,” Laney said.

The Blue Ribbon Ride, supporting Owens House, has been a tradition as long as Mike DeSantis can remember.

DeSantis is the general manager of the Heart of Dixie Harley-Davidson, and he said Owens House has also been the main charity organization since the Hog Group was formed.

“The students thought it was really cool to see the motorcycles…they were real excited to get to see them,” Laney said. “I thought, from the students’ perspective, it was a great way to combine the two groups.”

The Blue Ribbon Ride will take place May 21 at the Heart of Dixie Harley-Davidson. The ride begins around 9 a.m. as the group heads toward Owens House. After circling back, the Hog Group will host an after party in the Hog Room.