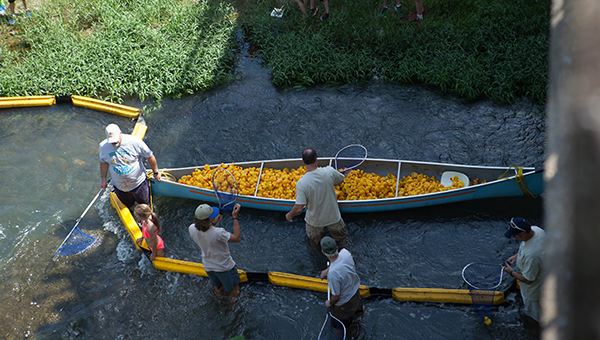 HELENA–Helena’s Buck Creek Festival has become a tradition for the second weekend in May, and while it provides plenty of fun and entertainment for the whole family, it’s also for a great cause.

Old Southern Moonshine Revival rocked the Buck Creek Festival stage on May 14, to cap off the weekend. (For the Reporter/Kevin McKee/Will Roberts)

The festival celebrated its 15th year the weekend of May 13-14, and once again provided entertainment, musical talent and of course, the famous duck race on Saturday afternoon.

The past 15 years have brought in more than $200,000 during the life of the festival, which has been returned to the community for a variety of projects and organizations.

This year, all of the proceeds received from sponsoring a duck for the duck race benefitted the Helena High School Band Boosters, who will use the money to purchase new uniforms, instruments and more.

Both Friday and Saturday provided warm, sunny weather, which bodes well for the outdoor festival and especially the duck race.

Thousands of yellow rubber ducks were dumped into Buck Creek as the duck sponsors anxiously watched to see if their duck would cross the finish line first.

In addition to helping the Helena High School Band, the sponsor of the winning duck received a first place prize of $500, followed by a $250 prize for second place and $100 prize for third place.

The duck race was made possible this year with some help from a local business in Alabaster, Airport Marine. The business donated a used 24-foot pontoon boat free of charge for the festival to use in 2016 after the previous boat was damaged and vandalized months prior to the festival.

Helena Mayor Mark Hall has seen the festival grow over the years and credited the hard work of the volunteers and organizers as a main reason for the success.

“This year’s festival attracted thousands of people into Helena from all parts of the metro area and was a huge success due to the great planning and hard work of the Buck Creek Festival organizers,” said Hall. “I would like to thank all the volunteers who work so hard and give up so much of their time to make the festival a success. Without their dedication to the festival and this city it would not be possible. The festival generates thousands of dollars for local charities and also boosts income at local businesses as well. It was a great weekend for our city and thanks to everyone who came out to support the event.”

After 15 years of fun, the festival is alive and well as Helena continues to grow as a community. 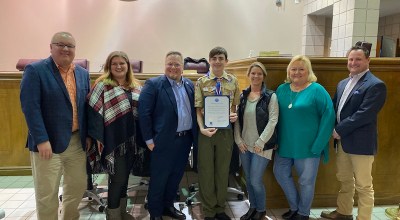