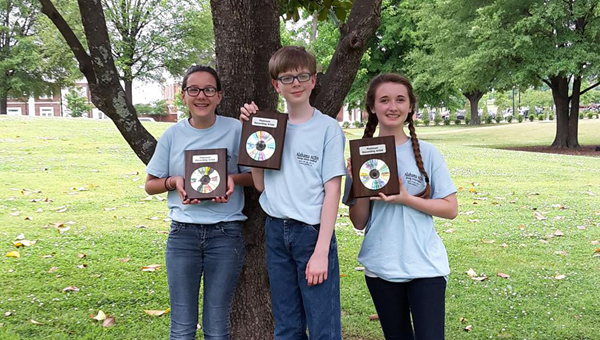 PELHAM— Three of Pelham City Schools’ choral students recently performed in the Young Voices Festival at the University of Alabama after being selected through an audition process.

Seventh-graders Shelby Kendall and Jonathan Wiedeburg, along with ninth-grader Dorothy Willman, spent the weekend in Tuscaloosa preparing for a culminating concert at the university.

“I really loved going out there,” Kendall said of the experience. “At first, I thought it would be super formal, but when we got there it was more like something where people do what they love: If you have passion about music, you sing.”

The Alabama American Choral Director’s Association hosts the Young Voices Festival for students in grades four through nine. Chorus Director Randy Duke said each of the students went through a rigorous audition process.

The students received their audition music when they returned to school in January, and the audition was in February. Duke said, for the most part, students practiced by themselves with a CD.

“It’s so awesome when you get that confirmation email saying, ‘Hey, you passed the audition,’” Duke said. “Then it’s on campus of the University of Alabama. I consider it an honor choir because you do audition.”

The students left on Friday and had about three to four rehearsals with respected choral professionals over the weekend, according to Duke. He said directors were from Florida State, Vanderbilt and Mississippi College for Women, among others, this year.

While the kids had fun, Duke said he enjoyed the experience as well. He was able to watch all the students perform and take notes.

Willman said she most enjoyed being able to meet new students and choral professionals. She admitted she was nervous for the audition process, but performing on the stage at UA was exciting.

This is Wiedeburg’s second year performing at the festival, so he said he knew what to expect going into the audition and rehearsal processes. From the food to the music to staying in the hotel, Wiedeburg said he loved every part of the process.

“I really can’t say I preferred one part to the other; it’s all good,” he said. “You are there with all these other skilled people, you’re at a university in a room specifically built for singing in and performing, you’re working hard with people, you are getting to meet a few directors who are really good.”

Both Wiedeburg and Kendall said they plan to audition for the Young Voices Festival again next year, as well as the All State competition. Duke added he expects to have more of his students audition for the festival next year.