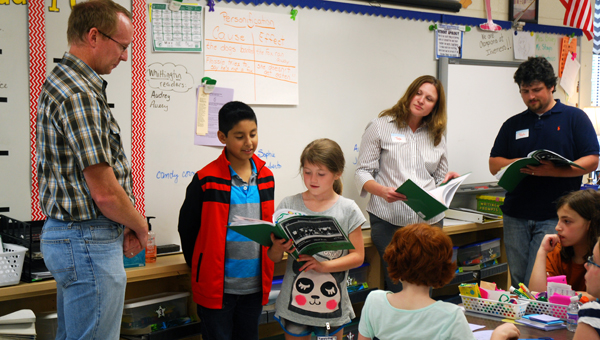 A student in Pam Taylor’s third grade class reads a poem to engineer Matt Stoops. Taylor’s class wrote thank you letters and poems to each of the engineers they worked with this year. (Reporter Photo/Molly Davidson)

The three Sain Associates, Inc., civil engineers have been a regular part of Taylor’s classroom since the beginning of the academic year, stopping by every Wednesday during the back-to-back math and science periods.

“They’ll share the projects they’ve been working on,” Taylor said. “Science and math go hand-in-hand in their field.”

Bailey, Montanaro and Stoops aren’t just presenters, they interact with the third graders, engaging them with real-life engineering scenarios and coming up with possible solutions together.

The students and engineers put their heads together to solve different problems, such as how to widen a road flanked by a river on one side and a hill on the other and how to expand IES, all while keeping important factors, including water runoff and cost, in mind.

“I liked it when they share what they have done,” student Avery McClain said. “I like to hear the problems and figure out ways to solve them.”

The engineers also served as mentors and tutors for Taylor’s third graders. They teamed up with students to work on topics students were learning in class.

“I’m a multiplication master, and I probably wouldn’t be one if Mr. Montanaro hadn’t taught me tricks,” McClain said.

“Mr. Stoops taught me all the times nine (multiplication) facts,” student Katelyn Gunn added. “They helped me with my math a lot, with my area and with my perimeter.”

Many of Taylor’s students not only learned from the engineers, they were also inspired by them. Taylor said a number of her students developed an interest and curiosity to learn more about the field.

“Mrs. Bailey has inspired me, I thought all engineers were boys,” Gunn said. “I enjoyed them coming so much.”

McClain said her father is an engineer, and now she would like to be one too.