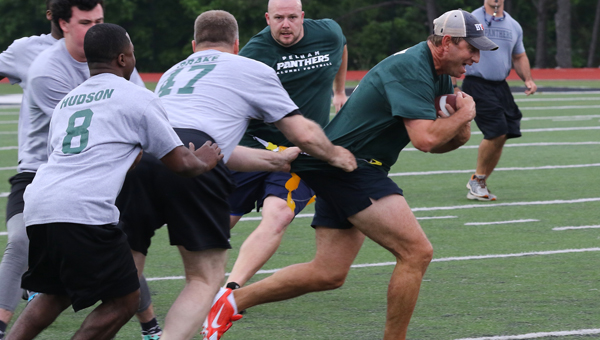 Dabo Swinney, 81, and dozens of Pelham High School graduates returned to the football field for an alumni flag football game. (For the Reporter/Eric Starling)

PELHAM— As Dabo Swinney ran out onto the football field with his team, he wasn’t sporting his typical orange and purple for the Clemson Tigers. The evening of May 17, Swinney was wearing green.

Instead of collegiate athletes, Swinney’s team was comprised of Pelham High School alumni with graduation dates varying from 1981 to 2015. His team also included three members of the Hayes family with City Council President Rick Hayes serving as quarterback.

On the other side of the field, Pelham City Schools President and former PHS head football coach Rick Rhoades took on the position of coach once again. He served as coach for the grey team with former University of Alabama player Tyler Watts as his quarterback.

This was the first annual Pelham High School Alumni flag football game, and the stands were filled with fans eager to see which side—green or grey—would prevail.

“It’s great. I’m glad to be back; it’s good to see a lot of old faces,” Swinney said in a pre-game interview. “I’m just looking forward to having some fun in my old stomping grounds. It’s been a long time since I’ve been on this field.”

As the head football coach for Clemson University, Swinney, who graduated from PHS in 1988, took part in both the coaching and playing amongst his former teammates.

Rick Hayes, who hasn’t played on the field since 1983, said he was thrilled to be on the field again, playing with former teammates and his own son, Robert, who graduated in 2014.

“It is a blast to be out here with a lot of friends,” Hayes said. “So many of these guys, we go way back, and it is a lot of fun to be here. I am scared to death for how many injuries we are going to have, but I’m looking forward to it. It’s been a long time coming, and it’s just great to see everybody out here together.”

After former Pelham Mayor Bobby Hayes passed out bubble gum to all the players—in true Bobby Hayes tradition—he performed the coin toss to determine who would start the game.

As someone who hasn’t missed a game in more than 20 years, Bobby Hayes said it was great getting to see all the familiar faces.

“I am so thrilled to see some of these kids,” he said. “I’ve already seen some kids that I haven’t seen since they left here. It’s fun, and when I hold up the bubble gum they go, ‘We’re getting bubble gum?’”

The teams played two 30-minute halves, with both making only one touchdown in the first. Both teams, green and grey, finished in a tie: 6-6.

By NEAL WAGNER / Managing Editor COLUMBIANA – For Allison Boyd, Mental Health Month is much more than just a... read more