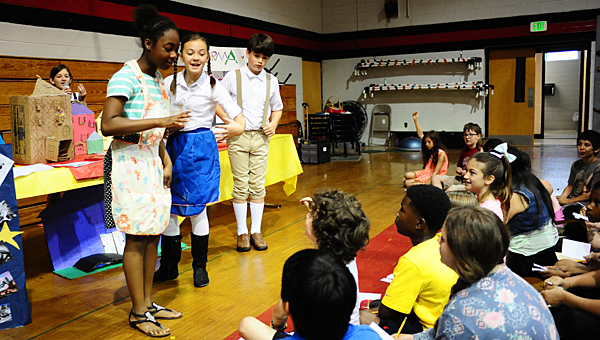 “The most interesting thing I learned was that if you escape jail, there’s no punishment,” Rose said. “I think you should have to go back to jail if you escape.”

Rose’s classmate, Josephine Phillips, uncovered a similar bit of information while researching for the day.

“If you run out of gas on the Autobahn in Germany, you could get arrested,” Phillips said. “I thought that was strange.”

Rose and Phillips were among many fourth- and fifth-graders at the school who shared presentations during the multicultural day, which celebrated cultures from across the globe.

In January, TIS classrooms chose a country or region – such as Europe, Kenya, Central America and the United States – and have spent the past several months researching and learning about their cultures.

“We actually have a few students form Kenya, and this is just their second year in the United States,” said English as a second language teacher Rhonda Gregg, who worked with fellow ESL Jennie Tindell and instructional support professional Dolly Chavez to organize the day.

The students’ research culminated on May 18, when representatives from each classroom donned the clothing of their chosen regions and gave their classmates presentations explaining the cultures.

“It was fun to get picked to do this,” Rose said after helping her classmates Tindell, Bailey Pearce and Cole Evans give several presentations on Europe. “I love to learn, and I like to teach others.”

During the presentations, students set up several stations in the school’s gym, used plenty of props and sometimes even food representing the cultures they were portraying.

Displays included a large display showcasing the Chinese alphabet, scenes from the Caribbean and even a life-size Kenyan hut containing African artifacts. At each station, students watching the presentations were required to jot down facts about each region on small passports.

“They really did a great job of preparing for this today,” Gregg said. “We want all of our students to learn about the different regions of the world.”