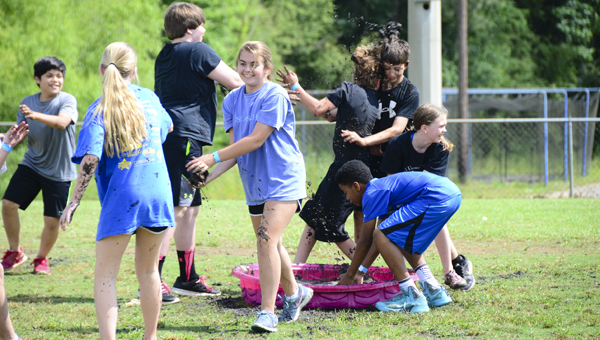 Students at Chelsea Middle School sling mud at each other at Organized Chaos, an annual school fundraiser, on May 18. (Reporter Photo/Emily Sparacino)

CHELSEA – As soon as the school day ended May 18, hundreds of Chelsea Middle School students hurried out to the football field, ready to make a mess.

Students visited a pasta pool, chocolate slide and other stations to cover each other – and themselves – with food and other substances during Organized Chaos, an annual school fundraiser spearheaded by the CHMS PTO.

“It’s a fundraiser they can look forward to,” PTO President Nicole Erwin said. “The kids come out here and get so gross.”

Students each paid $10 to participate. Once inside the football stadium, they were allowed to roam the field and get messy.

Leasa Holsombeck and her younger daughter, Jamie, watched her older daughter, Jessie, a sixth-grader at CHMS, and her friends try to dodge mud and other things being slung around the field.

“She was so excited,” Leasa said of Jessie. “She’s seen it (Organized Chaos) from elementary and couldn’t wait.”

The Cool Whip and eggs station is normally a favorite among the students each year, Erwin said.

A student passing CHMS social studies teacher Michelle Caiola on the track said, “Mrs. Caiola, this is worse than I thought.”

Caiola said many of her sixth-graders didn’t have an idea of what to expect at Organized Chaos.

“It’s basically a chance to run around and play,” Caiola said.

Erwin said the PTO hopes to raise about $4,000 from this year’s Organized Chaos.