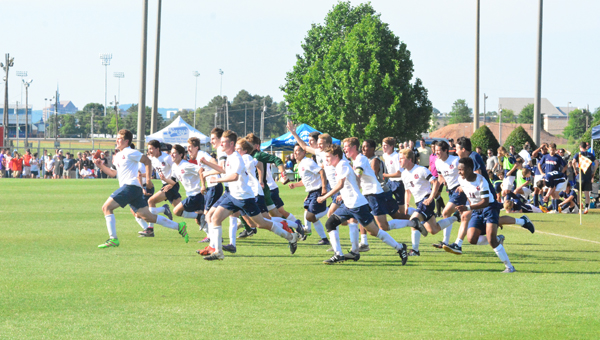 The Oak Mountain boys soccer program recently won its second-consecutive 7A state title and finished the 2016 season undefeated, and have been tabbed as the top prep team in the nation by USA Today. (File)

NORTH SHELBY – The awards just keep coming in for this Oak Mountain team. The boys’ soccer program, fresh off an undefeated season and its second-consecutive 7A state title, has now been tabbed as the top boys prep soccer team in the country, per the USA Today/NSCAA Super 25 rankings released on May 17. The Eagles, who finished the year with a 28-0-2 record, have been near the top of a number of national polls for the latter-half of this season, and are currently ranked as the No. 2 team in the country by Maxpreps.com, behind only River Bluff (S.C.), but have not eclipsed the No. 1 ranking anywhere until now.

This Oak Mountain team was highlighted by a core group of seniors, specifically senior defenders, which held this team together. Christian and Chandler Thomason, Brandon Kelley and Landon White made up the all-senior defensive unit, and played in front of senior goalie Ryan Dearman. In 30 games Oak Mountain gave up more than one goal just twice, in the second game of the year against Smiths Station and against Spain Park on Feb 25. On the year the Eagles gave up just 13 goals total, good for an average of less than .5 goals per game, and posted 19 shutouts.

Oak Mountain also benefitted from the presence of potentially the best player in the state in Hunter Holstad. Holstad, who played much of his Oak Mountain career as a defender, but split time this year as a center mid and a forward, filling different roles on a game-to-game basis for the Eagles.