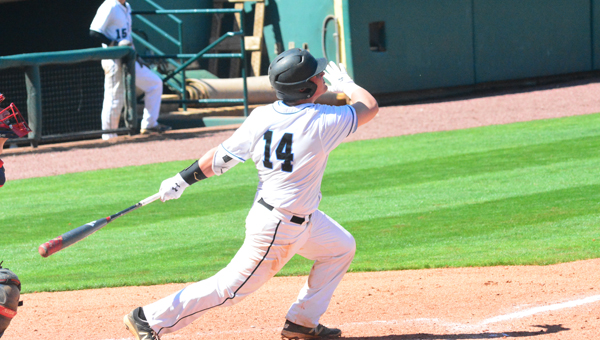 Helena’s Sam Praytor had 54 hits in his junior year, had a county-best 13 home runs and a county-best .631 on-base percentage to go along with a .454 batting average. He is the baseball Co-Player of the Year in Shelby County. (File)

It is time once again. The same task must be tackled at the end of every sports season, and this spring is no different. In the wake of the end of the spring sports calendar, and with the blank summer landscape staring us all in the face, the final piece of business necessary to put a bow on this school year is hammering out the All-County lists and naming the Players of the Year from each respective sport. This week we’re focusing on baseball, which means this week we’re focusing on two of the most formidable hitters from across the state. 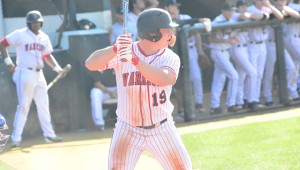 Thompson’s Heath Haskins hit .477 in his senior season for the Warriors, smacked 11 home runs and drove in 43 runs while reaching base on more than 60 percent of his at-bats, all while not making a single error in the field. He is the baseball Co-Player of the Year in Shelby County. (File)

Sam Praytor, the junior catcher from Helena, and Heath Haskins, the senior centerfielder from Thompson, occupy positions on the baseball diamond as far away from the other as possible. That being said, the two had eerily similar, incredibly productive years in 2016, especially from the plate. The two combined for 107 hits, 87 RBIs and 24 home runs while their batting averages, on-base percentages and slugging percentages were all within a razor-thin margin of the other. Both were coming off of already-productive seasons a year ago, and both managed to outstrip their impressive numbers from last year in the 2016 season. Putting one above the other after the year’s they have had is an impossible task, and therefore they are the Shelby County baseball Co-Players of the Year for the 2016 season.

Haskins has been the starting centerfielder for the Warriors since the first game of his freshman year, and coming into his senior campaign had more than established his reputation as a formidable all-around hitter. Evidence of that can be found in the fact he drew 30 walks in his senior campaign, as teams routinely tried to pitch around him. When opposing teams did pitch to him, he did not often see anything useful to hit, but still finished the year hitting a ridiculous .477, almost a 90-point jump from the .390 average he posted as a junior. He also had 53 hits in 43 games, 43 RBIs, 11 home runs, an on-base percentage of .603 and a slugging percentage of .910.

“As far as an all-around player he’s one of the best ones we’ve ever had,” Thompson head coach Pat Hamrick, who has been the Warriors’ head coach for the last 21 years, said of his graduating centerfielder. “He’s an excellent centerfielder, he’s stolen 49 bases in his career, he hits for power and average. Even this year, people pitched around him and he still hit .477. He’s got a great arm in the outfield. He threw kids out this year, but he’s been doing that for four years. He’s a really solid baseball player.”

Across the county, Praytor could have been Haskins’ mirror image. This Helena team was marked by a hyper-talented group of juniors that led the Huskies to 36 wins, and Praytor was chief among them in terms of production. Praytor was walked an astounding 49 times in 2016, but still registered 54 his in 46 games to go along with 44 RBIs and a county-leading 13 home runs. He hit .454 and had an on-base percentage of .631, which was also tops in the county, as well as a slugging percentage of .908.

Helena head coach PJ Guy, who has been around baseball as a player and a coach for the last 29 years, had similar things to say about his catcher along the same lines as what Hamrick said of Haskins.

“I’ve coached some good ones, but I’ve never coached anyone that has the type of skill level and talent that he has,” Guy said. “The part about Sam that I think is so impressive is I don’t think I’ve coached anyone with the same type of passion and work ethic that he has. We have to kind of hold him back at times, he always wants to go to the cage and hit more. He has the natural talent, but hard work pays off, and he’s such a hard worker.”

While their numbers from the plate more than speak for themselves, the two are also some of the best in the field across the state as well. Haskins did not make one error in 83 chances in his senior year, and finished his high school career with two, yes two, errors to his name. The first error came in his first-ever high school start as a freshman, when a 30 mile-per-hour wind took one of his throws from the outfield off-course. The second came a season ago in the state finals. The Wallace-Hanceville Community College commit is one of the most sure-gloved fielders around, and showed it time and again during his career as a Warrior.

“Wallace-Hanceville is definitely getting a steal,” Hamrick added. “He’s one of the best players in the state.”

Praytor, a University of Alabama commit, did not have the same type of season from behind the plate that he did as a sophomore from a statistical perspective, but that was simply because he had less chances to show off his quality arm because fewer base runners attempted to test him.

“He’s as good of a defensive catcher as there is in the state of Alabama,” Guy said. “The type of year he had, he’s the Player of the Year in the state in my opinion. He’s always been our guy.”

Haskins leaves Thompson as one of the winningest players in program history with 126 wins to his name over the last four years, and will head to the collegiate ranks in the fall, joining Wallace-Hanceville’s baseball roster, where he will try to snag an offer from a bigger school in two years once his junior college days are up. Praytor will be back next spring as a senior for Helena as he tries to lead the Huskies to the school’s first baseball state title.

Oak Mountain’s Joseph Hartsfield helped lead the Eagles to the most wins in program history in 2016. (File) By BAKER... read more