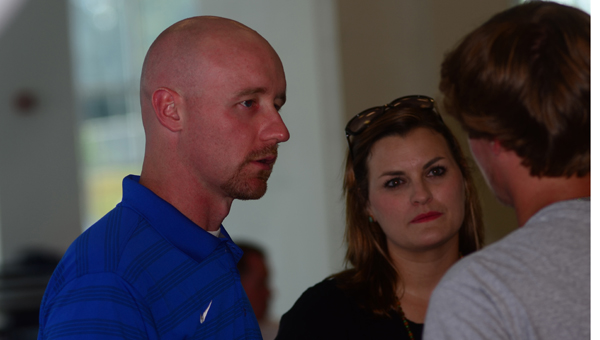 Oak Mountain head coach Derek Irons led the Eagles to a program-best 30 wins in 2016, and guided the Eagles to the playoffs for the first time since 2011, and is the baseball Coach of the Year in Shelby County. (File)

NORTH SHELBY – When Derek Irons came to Oak Mountain in June of last year to become the Eagles’ new head baseball coach, the expectation was that he would bring his intentional, players-first coaching mentality to the program, which would hopefully result in sustained success on the diamond after a few years. However, it took Irons all of one season to take the Eagles from a pedestrian program that had routinely missed the playoffs over the last five seasons into a legitimate, bona fide contender in an area already full of them. Oak Mountain won more games, 30, in Irons’ first season than the program has in any year prior to this one, and not only made the 7A playoffs, but knocked off state power Vestavia Hills in the first round as well. In light of the job Irons did at Oak Mountain this year, he is the 2016 baseball Coach of the Year in Shelby County.

As is always the case when trying to divvy out awards such as these, there are always arguments to be made for different people. Ryan Halla for example, also in his first year at a new school, took a Vincent team that had missed the playoffs in 2015 and guided the Yellow Jackets to a second-round playoff appearance in the 2A ranks, and had an overall strong opening year. Trey Simpson at Montevallo also deftly coordinated a stable full of Bulldog arms all the way to the 4A state quarterfinals and Seth Gandy led Calera to its best record in the last 20 years, if not the best record in the history of the program. There is a case to be made for them, yes, and others as well. However, the job Irons did to quickly make Oak Mountain a statewide threat went unmatched this year.

In the years before Irons came Oak Mountain he had already established himself as one of the premier coaches in the state. Irons was at Charles Henderson High School in Troy for seven years before accepting the Oak Mountain job, and his record there was 221-62, good for an overall winning percentage of 78 percent, and included state championships in 2013 and 2014. In his last three years as the head coach of the Trojans, their overall record was a ridiculous 116-17. When Oak Mountain was able to pull Irons out of Troy back in June of last year, the administration hoped that the magic he had been able to cultivate there would follow him to Birmingham.

And follow him it did. Oak Mountain, which had posted a pedestrian 90-82-1 record over the last five years and had missed the playoffs in each of the last four seasons, came alive this year on the baseball diamond. After starting the year hot at 6-1, the Eagles continued to trend upward all season, and not only won more games than any other team before them in school history, but also clinched a playoff berth that had eluded the program for so long. The Eagles started 7A Area 5 play in an 0-2 hole after back-to-back losses to Hoover on April 5 and 7, but bounced back to win their next four area games in a row against Thompson and Tuscaloosa County, showing an ability to win big games with their backs against the wall.

After Oak Mountain made the playoffs, the Eagles immediately faced one of the toughest opponents in the state in round one in Vestavia Hills. The Rebels had not only been one of the top teams in the state this season, but also one of the top teams in the country, as Vestavia was ranked as a top-25 team in the nation for most of the spring by Maxpreps.com. Oak Mountain lost the first game of the series, but came back to win the next two in dramatic fashion, knocking the Rebels out early and punching a ticket to the 7A quarterfinals in the process.

Irons has always maintained the most important aspect of his coaching career is not his win-loss record, but rather the relationships he has built and continues to build with his players. Many coaches will say something along these lines; in fact almost every coach in any sport will say something similar to this when asked. However, more often than not the proof is in the product, and in Irons’ case the results have always spoken volumes about the way he runs his teams. He has a natural ability to get the absolute maximum efforts from his players, and this year was a sign of things to come from the Oak Mountain program as long as he sticks around.

Irons also specifically mentioned assistant coaches Brandon Lee and Jason Neeley as integral parts to this teams’ success as well, as Lee worked with the hitters and infielders specifically while Neeley coached the pitchers and outfielders.