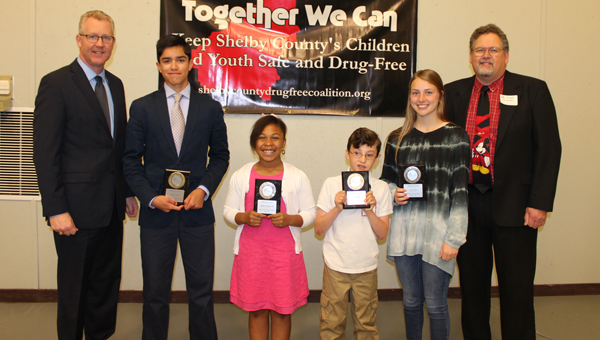 “This student award was created by Judge Kramer in a partnership with Juvenile Court and the District Attorney’s Office to celebrate our students that are setting the example in our schools and doing good things,” Emily Littrell, social worker for Shelby County Schools, said of the awards.

A different school zone is highlighted each month, and Littrell said the schools within that zone nominate one student for the award. Only one student from each school is chosen, and teachers include a statement about why the student was chosen.

Nolan is a two-sport athlete, an honor society member and volunteers with the Special Olympics, according to her teachers. She’s known as being respectful to peers and adults, saying, “You can disagree with a teacher and still be respectful when discussing matters.”

“Grace’s self-discipline is the strongest that I have witnessed in my 23-year career in education,” her teacher wrote. “Grace shows unbelievable maturity and fairness in her interactions with others. Grace has overcome adversity in the past year, all while maintaining a positive attitude. She stands out in my mind as an excellent example of perseverance.”

Fanella participates in track and is known to congratulate all of his competitors with an outstretched hand. According to his teachers’ statements, Fanella is also running for president of SGA for his ninth grade class, and he is president of the Junior National Honor Society.

“Dominic represents our school system as a model citizen,” his teachers wrote. “As a student, his work always reflects an emphasis on citizenship and all that goes with it…He doesn’t leave anyone out or behind; he will work diligently with his peers to make sure that they understand the concepts.”

According to her teachers, Hollingsworth practices random acts of kindness at school, doing things in kind without saying a word. She volunteers to help clean in the lunchroom, tries to be helpful, takes pride in her classroom and “willingly does her part to make good things happen.”

“Katlyn shows a maturity beyond her years by being respectful to everyone she meets and treating everyone in a kind manner,” her teacher wrote. “Katlyn is an amazing student. She is always smiling and in a good mood. Katlyn is absolutely the friendliest child I’ve taught in 15 years as an educator.”

Kalba’s teachers said he is polite and respectful even at times when he is frustrated.

He attends the evening runs and encourages others to participate as well; he thinks of others and strives to make a positive impact on students and teachers.

“Lucas has a kind and caring heart. He looks out for his peers and is a great friend to all who know him,” his teacher wrote. “Lucas can often be heard saying ‘Let them go first’ or ‘They can have the first turn.’ This is not typical second grade behavior, but it is typical Lucas behavior.”

Students at Chelsea Middle School sling mud at each other at Organized Chaos, an annual school fundraiser, on May 18.... read more