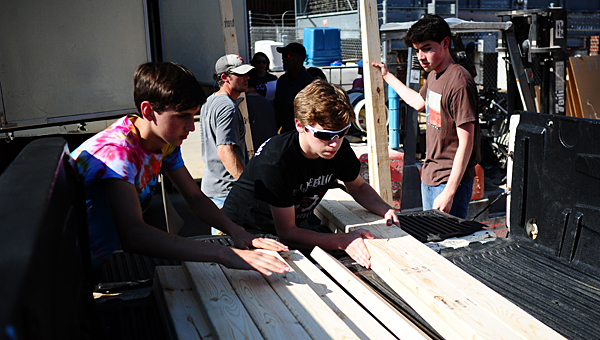 Thompson High School students unload building materials from a pickup truck and load them onto a waiting 18-wheeler to ship to Jutiapa, Honduras. A group from Alabaster will travel to Jutiapa in June through the Alabaster City School System’s Sister Schools program. (Reporter Photo/Neal Wagner)

ALABASTER – As soon as the 18-wheeler backed into the loading zone behind Thompson High School’s engineering classroom, the about 25 students and teachers didn’t waste a second.

“We’ve got a two-hour window of time to get it loaded,” THS science teacher John Cole said shortly before the truck arrived at the school on May 19. “But we’ve got a pretty good plan of how to get it in there.

“It makes it a lot easier when everyone is on the same page,” Cole added. 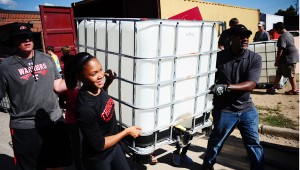 Students and teachers work to load large water containers onto an 18-wheeler to ship to Honduras. (Reporter Photo/Neal Wagner)

A few weeks before a group of Alabaster students, teachers and volunteers were set to fly to Jutiapa, Honduras, in mid-June on a trip to create a better quality of life for the residents there, students and teachers gathered at the school on May 19 to load the 18-wheeler with items to ship to Jutiapa.

In only a few short hours, the group had packed the truck with dozens of boxes and containers, such as large water containers to hold treated water, old computers for Jutiapa’s school, building materials, industrial air-conditioning units, clothing and shoes and more.

After the group loaded the truck, which was provided by the Dole company, it traveled to Gulfport, Miss., where its contents will be loaded onto a Dole ship and transported to Honduras. After reaching Honduras by ship, the items will be transported by truck to Jutiapa, where they will meet the Alabaster group in June.

During the Sister Schools trip, the Alabaster group will complete several projects to benefit the town. While there, the group will deliver and install computers for the town’s school, will install small water chlorinators to make the town’s water supply safer, will volunteer in the town’s medical clinic and will install a device to create medical-grade bleach to help the clinic to improve its disinfecting procedures.

THS engineering teacher Brian Copes, who worked to organize the Sister Schools program, said most of the items being shipped to Jutiapa are for the town’s school and medical clinic.

“The rest are what we are calling blessing items,” Copes said of the boxes of donated shoes, mattresses and clothing being loaded on to the 18-wheeler.

To learn more about the project, or to sponsor a student traveling on the Sister Schools trip, visit Facebook.com/acssisterschools. 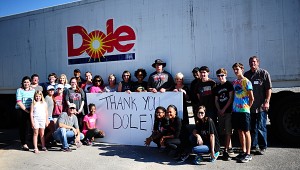 The group shows its appreciation to the Dole company for shipping the items to Honduras. (Reporter Photo/Neal Wagner)