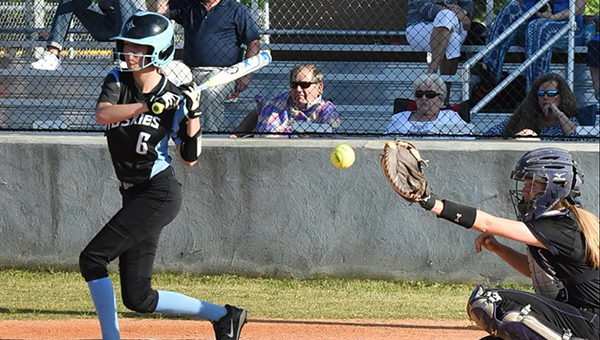 The Helena Lady Huskies softball team finished as the AHSAA Class 5A runner-up after falling to Springville in two games on May 19. (File)

MONTGOMERY–The Helena Lady Huskies softball team had a stellar showing in the 5A softball state tournament, advancing to the state championship game after going 4-0.

Helena could not defeat Springville however, and lost two games to finish as the Class 5A runner-up.

In round one of the 5A state tournament, Helena jumped out to an early 3-0 lead in the first three innings and broke through in the top of the 10th inning to defeat Etowah 7-3 in extra innings.

In the top of the first inning, Helena’s Mekhi Mayfield blasted a solo homerun to put the Lady Huskies ahead 1-0.

Helena’s Jordan Ingram singled to centerfield in the top of the second inning to score Laney Bruner and extend the lead to 2-0 and another single by Maggie Blanton in the top of the third inning scored Katie Lively to make it 3-0.

The Lady Blue Devils fought back to tie the game in the bottom of the fourth inning after Jessica Smith hit a three-run homerun to left field to score Emma Jones and Alyssa Howard to tie the game 3-3.

The game remained tied at three over the course of the next five innings until the Lady Huskies broke through to score four runs in the 10th inning get the win.

As a team, Helena collected 17 hits and Lively recorded the win in the circle after pitching three shutout innings.

After a tough extra innings game in round one, the Lady Huskies had a quick turnaround to face Rehobeth in round two and once again Helena held on to win a tight 4-3 game.

Helena led the entire game and got on the scoreboard first after Katie Lively hit an RBI single to make it 1-0.

Helena extended its lead in the bottom of the third inning after Reagan Curtis hit a three-run homerun to score Mekhi Mayfield and Jordan Ingram to extend the lead to 4-0.

Rehobeth slowly got back in the game scoring a run in each of the next three innings, but Helena starting pitcher Avery Barnett shutdown the chances of a comeback in the top of the seventh inning and Helena held on for a 4-3 win.

Barnett pitched a complete game, striking out seven and allowing one walk over seven innings.

In the third round of the state tournament, Helena needed a win against Marbury for a berth in the 5A state championship game.

Both Helena and Marbury scored their run totals for the game in the first inning and a pitchers’ duel broke out for the remainder of the game as the Lady Huskies hung on to win 4-3.

Helena scored four runs in the top of the first inning on a two-run double by Katie Lively, an RBI single by Mackenzie Wilson and an error.

Marbury responded in the bottom of the first inning to score three runs on a three-run home run by Loren Ross.

Over the next six innings, neither team could push another run across and Helena starting pitcher Avery Barnett rebounded from the first inning to pitch a complete game and earn the victory. After allowing three runs in the first, Barnett struck out three and walked none.

With the win, Helena advanced to the finals to face Springville.

Helena headed to the state championship game with a 4-0 record in the double elimination tournament where they took on Springville to battle for the 5A state title. Helena needed to win one of two games to be crowned state champions.

Springville lost their first round game 4-1 to Beauregard, but rebounded to win their next four games in the losers’ bracket to face Helena, but needed to beat Helena twice to be crowned state champions.

Springville took care of business in game one to defeat Helena 6-3, and forced a winner-take-all game two.

Springville scored two runs each in the second third and fourth innings to take a 6-0 lead.

Helena rebounded to score three runs in the top of the sixth inning after an RBI double by Reagan Curtis, a groundout by Katie Lively and an RBI single by Mackenzie Wilson to pull within three runs of Springville.

The Lady Huskies couldn’t produce three runs in the final inning to send the game to extra innings and Springville captured the win.

In the winner-take-all game for the 5A state championship, Springville’s offense came alive late in the game and the Lady Huskies could never recover, losing 6-2 and finishing the season as the AHSAA 5A State Runner-up.

The Lady Huskies got on the scoreboard first and took a 2-0 lead in the bottom of the third inning.

Helena kept the Springville offense in check until the top of the sixth inning when Springville tied the game 2-2.

In the final inning, Springville broke the game open and scored four runs on two doubles and a two-run homerun by Meg Sullivan to take the lead 6-2.

Helena needed to score four runs in the bottom of the seventh inning to send the game to extra innings, but couldn’t rally.

Helena finished the season with a record of 32-17. The season highlights included the Class 5A Area 7 Championship and a berth in the state tournament after qualifying in the 5A South Central Regional.