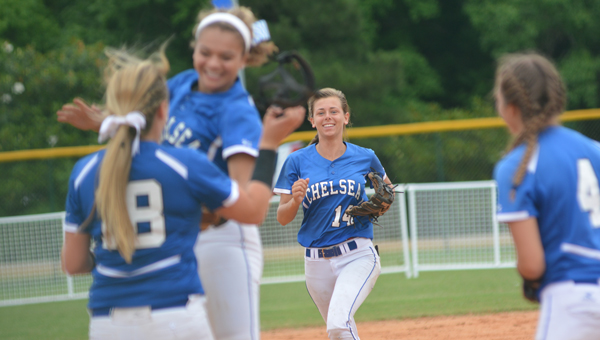 The Chelsea Lady Hornets clinched the 6A softball state championship on May 20, and went 4-0 in the state tournament. (Reporter Photo / Baker Ellis)

MONTGOMERY – The quest to determine the best 6A softball team in the state eventually came down to two very familiar foes. The Lady Hornets from Chelsea and the Lady Yellow Jackets from Oxford, both of whom play in 6A Area 10, met for the sixth and seventh times this season in the 6A state tournament in Montgomery on May 20. Chelsea, which finished as the 6A Area 10 runner-up to Oxford back on May 3, got the best of the Lady Yellow Jackets when it mattered most, beating Oxford by identical scores of 3-1 and 3-1 in the semi-finals and finals.

Chelsea beat Dothan and Southside-Gadsden in the first two rounds of the state tournament on May 19 before beating Oxford twice in a row on May 20 to claim the title.

Full story to follow, check back at Shelbycountyreporter.com for a full recap.