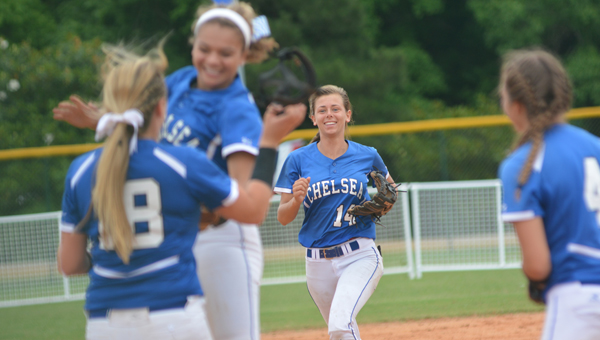 McKenzie Bryant and the Chelsea Lady Hornets celebrate after beating Oxford for the first time on May 20. Chelsea beat the Lady Yellow Jackets twice on May 20 en route to claiming the 6A state softball title. (Reporter Photo / Baker Ellis)

MONTGOMERY – The quest to determine the best 6A softball team in the state eventually came down to two very familiar foes. The Lady Hornets from Chelsea and the Lady Yellow Jackets from Oxford, both of whom play in 6A Area 10, met for the sixth and seventh times this season in the 6A state tournament in Montgomery on May 20. Chelsea, which finished as the 6A Area 10 runner-up to Oxford back on May 3, got the best of the Lady Yellow Jackets when it mattered most, beating Oxford by identical scores of 3-1 and 3-1 in the semi-finals and finals to clinch the school’s second softball title. 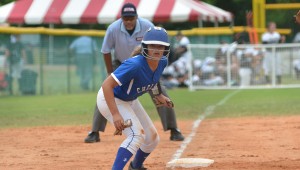 Allie Miller watches home plate intently as she prepares to make a dash during the 6A state softball tournament. (Reporter Photo / Baker Ellis)

Chelsea beat Dothan and Southside-Gadsden in the first two rounds of the state tournament on May 19, setting up a semifinal matchup with Oxford, a team Chelsea had seen five times in the year prior to the state tournament, and was 2-3 in those matchups. Chelsea head softball coach Heather Lee knew that, while the first five meetings counted, it was really only the final matchups that truly held weight.

“I’ve said numerous times, us and Oxford, I feel like we’re two of the best teams in the state,” Lee said. “What we do here matters. When we saw we were going to draw them in the bracket, I just told my girls to win when it counts, because this counts. For us, we’ve seen them, we know what they do, so it was important for us to jump on them and put the pressure on them. We needed to attack and make the routine plays.”

In the first game between the two in the state semifinals, Chelsea took a 3-0 lead into the seventh inning on the back of another tremendous pitching performance from Sarah Cespedes. Cespedes did give up a solo shot in the bottom of the seventh, but the Lady Yellow Jackets got no closer, as Chelsea won and advanced to the 6A finals.

Oxford then beat Southside-Gadsden in the loser’s bracket final, prompting a rematch with Chelsea in the state finals. The Lady Hornets fell behind in the bottom of the first inning 1-0, but quickly tied things back up in the top of the fourth. The tie game held until the top of the seventh, when Mallory Bradford hammered a home run, scoring two runs and giving Chelsea a 3-1 lead, eventually winning the game by that margin and claiming the state title in the process.

Chelsea finished the season as the 6A state champions with a 31-12 record.

Annabelle Wildra and the Spain Park Lady Jags finished the 2015 season as the 7A softball runners-up after going 4-2... read more