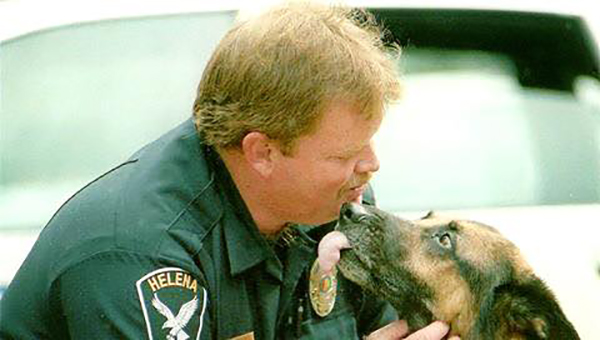 Former Helena Police Chief Doug Jones, who served the Helena community for more than 34 years, passed away on May 21. (Contributed)

HELENA–The Helena community received some sad news as they learned former Helena Police Chief Doug Jones passed away on May 21, according to the Helena Police Department.

Jones served the Helena community for more than 34 years in law enforcement before retiring in August 2015.

“It is with great sadness that the Helena Police Department announces the passing of Retired Police Chief Douglas W. (Doug) Jones,” read a statement from the HPD Facebook page. “Chief Jones is remembered mostly for his great love and dedication to the city of Helena and his friendship and concern for the men and women of the Helena Police Department and for all City of Helena employees.”

During his 34 years of service, Jones served the Helena Police Department in a variety of roles including a K-9 handler, an investigator and as chief of police from 2004-2015.

Helena Mayor Mark Hall knew Jones the entire 34 years he served the community and considered Jones a good friend in addition to someone he worked alongside for a number of years.

“My heart aches as we mourn the passing of my friend, former co-worker and retired Helena chief of police Doug Jones,” said Hall. “Chief Jones was a respected member of law enforcement for over 34 years serving his beloved community, the city of Helena. I worked alongside Doug for many years and respected him as a trusted friend and fellow officer. I am proud to say Doug was a Christian, as he recently assured me he was right with our Lord, and he was prepared and ready to go whenever his time on this earth was done. He is no longer suffering, as he is now with our Lord.  I, as many other of his former co-workers, friends and the countless lives he touched, will forever miss Chief Jones. I could never thank him enough for his friendship to me and his selfless service to the city of Helena.”

Chief Jones is survived by his wife, Melissa, sons, Justin and Kyle, and stepson, Ross.

Flags around the city of Helena will fly at half-staff in the coming days in honor of Jones.

Some Wear in Time Consignment Boutique has leased 2,000 more square feet of space to bring in vendors selling a... read more