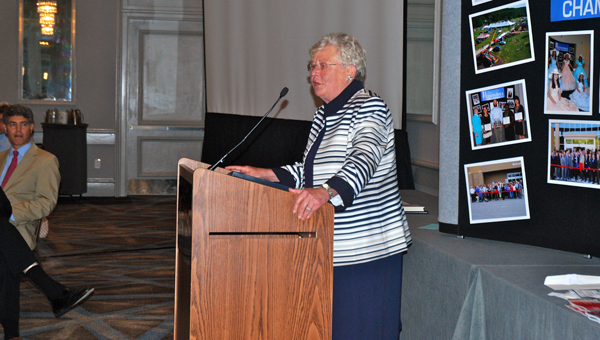 HOOVER—The future looks bright in Alabama, Lt. Gov. Kay Ivey told members of the Hoover Area Chamber of Commerce during a May 19 luncheon at The Hyatt Regency-The Wynfrey Hotel.

Ivey, the event’s featured speaker, addressed the many facets of the state’s budget, from earmarking to problems facing the budget.

Alabama has two budgets, the education fund, which is around $6.3 billion, and the $1.8 billion general fund.

While Ivey said the education trust fund is at its largest since 2008, she noted the general fund “is always strapped.”

“In the general fund, year after year, we do the best we can,” Ivey said.

The two biggest expenditures in the general fund, Medicaid and corrections, have continued growing. Medicaid expenditures have doubled since 2011, expanding from $345 million to $700 million, and the state’s prison system is facing “severe overcrowding” and aging facilities, Ivey said.

“It’s a serious need and situation, and it needs to be addressed,” Ivey said.

At a total of $2.2 billion, employee health insurance and retirement benefits are another large expenditure, and the “single largest cost…for funding state government,” Ivey said.

“We always take a reactionary approach to finding solutions,” Ivey said. “We need to have a proactive (approach).”

Ivey called for budget reform, noting many of the large expenditures facing the budget and state government have been the same for the past year.

In order to address budgeting and expenditure problems, lawmakers need to “start planning a year out,” Ivey said.

With planning and reform, Ivey expressed hope that the financial challenges facing the state can be solved.

“I truly believe the finest days in Alabama are ahead of us. The clouds will break and the sun will shine,” Ivey said. “I’m proud of Alabama, and I believe in Alabama.”