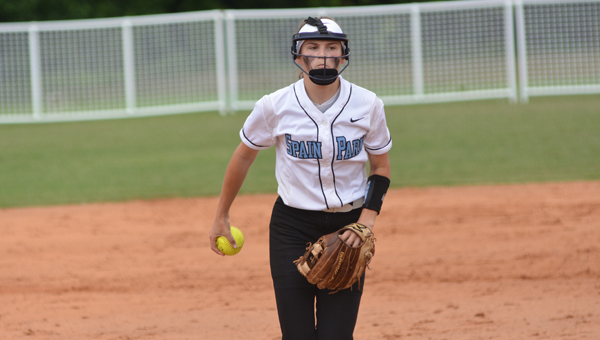 Annabelle Wildra and the Spain Park Lady Jags finished the 2015 season as the 7A softball runners-up after going 4-2 at the state tournament in Montgomery from May 20-21. (Reporter Photo / Baker Ellis)

MONTGOMERY – The Spain Park Lady Jags, winners of the 7A North Central Regional qualifier, entered the state softball tournament on May 20 with a 36-17 record, with hopes of bringing a Blue Map trophy back to Hoover. Spain Park has been one of the top 7A softball teams all season, and played like it at the state tournament, however the Lady Jags came up just short of the state title, falling twice to eventual champion Sparkman, and finished the year as the 7A runner-up.

“This team was resilient,” Spain Park head coach CJ Hawkins said of her group. “We’ve had a very tumultuous, up-and-down year. They stuck together, believed in each other. They overcame so many obstacles. You can’t put it on one player; there were so many standouts. They were all MVPs to me. People get caught up in the stats, but there was just a lot of unselfish play from that group of 22. There’s nothing I could ask more from my kids.”

The Lady Jags beat Fairhope in the opening round on the first day, setting up a second-round match with eventual champion Sparkman. The Lady Senators beat Spain Park 7-0 in that matchup, relegating Spain Park to the loser’s bracket. In the third game of the day on Friday against Central Phenix-City, the Lady Jags won that elimination game 7-6, coming back from a 6-4 hole in the bottom of the eighth inning. That win kept Spain Park’s season alive, and set up a slew of games on Saturday as the Lady Jags made the trek to the state title game.

The Lady Jags scored two runs in the first, second and fourth innings as well as a run in the third and sixth innings en route to easily handling James Clemens in the first game of the day on May 21. Destini England had three hits and three RBIs on the day while Julianna Cross, Mary Katherine Tedder, Kyndai Tipler, Maddie Majors and Bailey Bowers each had two hits as well to lead Spain Park from the plate. Annabelle Wildra started the game from the mound, throwing 99 pitches over six innings and giving up just one run on one hit before Caroline Kendrick came in to close the final inning.

The win against James Clemens moved Spain Park in the state semifinals in a game against Vestavia Hills, who the Lady Jags had played five times previously in the year, and held a 3-2 advantage over the Lady Rebels heading into that game. A huge, nine-run second inning from Spain Park was the difference in the sixth meeting as the Lady Jags took an early 10-0 lead and eventually won 13-2 in five innings. Tedder had three hits and two RBIs, while Wildra and Kendrick once again combined forces from the mound in the win.

Sparkman, which had not won a game by less than five runs in the state tournament, was once again waiting for Spain Park in the finals of the double-elimination tournament. For Spain Park to win state, the Lady Jags had to beat Sparkman twice in a row, no easy task. However, after the first inning Spain Park trailed just 3-2 thanks to first-inning runs from Cross and Taylor Harrington. However, Sparkman proved to be too much for Spain Park to handle, as the Lady Senators scored four runs in the third thanks to back-to-back home runs and two more in the fourth, winning the game and the state title 9-2.

The Lady Jags ended the season with a 40-19 record and finished the year as the 7A runners-up, the best finish since Hawkins took over the program in 2008. Spain Park will lose seniors Tipler and England, but will return the rest of its roster next season as the Jaguars look to make a return trip to the state finals.