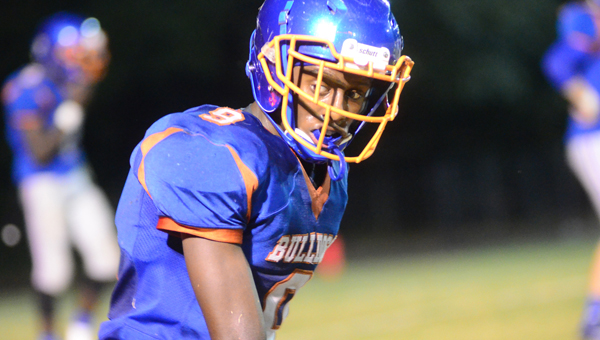 Ahmad Edwards had seven catches for 204 yards and two touchdowns in the Bulldogs’ spring game against Calera on May 19. (File)

CALERA – Calera welcomed in county neighbor Montevallo for a scrimmage on May 19, as a finale to the spring football window. The two teams are separated by only 12 miles and are very familiar with each other, and were playing each other in the spring for the second year in a row. The game had an added element of emotion this time around, however, as it was the first time that former Montevallo head coach and current Calera head coach Andrew Zow was seeing his old team for the first time, just four months after leaving Montevallo.

“It was weird,” Zow said of the experience. “To get off the bus and see Zac (Oden, Montevallo quarterback) throwing and me not be over there doing what we always did. My heart started pumping a little bit and I knew it was going to weird. It was one of the craziest feelings and I’m glad it (the game) is over.”

Montevallo is returning a key number of starters to its 2016 team under first-year head coach Brandon Wilcox, including Oden, wide receivers Ahmad Edwards and Daqwan Bryant as well as defensive back TreShawn Brown. After the three quarters that were played by both varsity starters, the Bulldogs held a 21-7 lead thanks in large part to the work of Oden, Edwards and Brown. Bryant sat out the spring game because of an injury.

“In the spring one of the big things for us is to see that the kids are giving great effort, that they’re getting better every day, and that they have a willingness to be coached,” Wilcox said. “I thought we got exceptional effort from our guys, and I thought we got a lot better as the spring went on. Our guys are very receptive to the coaching.”

In the three quarters that the varsity teams played, Montevallo built up a 21-7 lead. Oden was 14-for-20 throwing the ball for 338 yards and a pair of scores, while Edwards caught seven of Oden’s passes, going for 204 yards receiving and caught both of Oden’s touchdown throws as well. Brown, who played very sparingly on offense last year, also had six catches for 132 yards on offense to go along with 12 tackles on defense to lead the Bulldogs.

In the fourth quarter Calera scored three touchdowns and won the game 28-21 with the reserves playing the majority of the quarter.

“I was real excited to see the guys let loose and play with a lot of emotion,” Wilcox said. “I thought defensively we did a great job of having our guys prepared. We ran to the football well and didn’t have a bunch of busted assignments.”

“After going back and watching film I’m more pleased with what we did than I was,” Zow added. “We have a long way to go, but we have the pieces to get it done. It will take us going through the summer and working on fundamentals at every position.”