OMHS students return to where they started with first Grad Walk 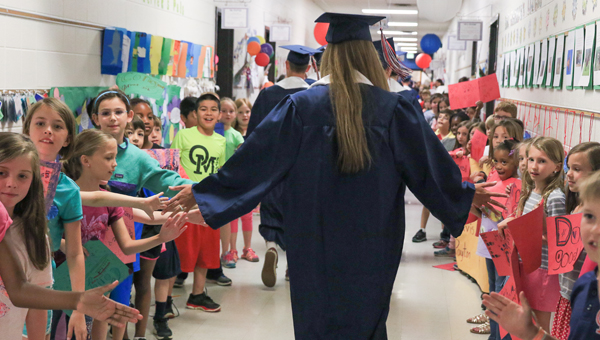 Oak Mountain Elementary School students high five an Oak Mountain High School senior as she walks through the OMES halls during the May 17 Grad Walk. (For the Reporter/Dawn Harrison)

Elementary school students high-fived and cheered on the OMHS seniors as they processed through the OMES and IES halls.

“It was just incredible, the elementary students were in the hallways with signs…It was basically a hallway pep rally,” OMHS U.S. government teacher Susan Schwartz said. “(The seniors) were just smiling, they were just firing up the students in the halls…it was like being a rock star.” 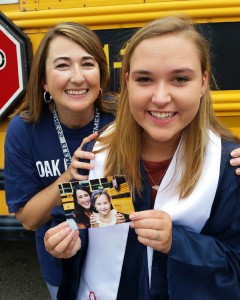 Inverness Elementary School third grade teacher Niki Burke recreates a photo with one of her former students, now a senior at OMHS. (Contributed)

The May 17 Grad Walk was not just an exciting experience, it was an emotional one as well, as students revisited their former classrooms and were reunited with former teachers.

IES third grade teacher Niki Burke spotted many of her former students as they walked the hall in caps and gowns. Burke said she and other teachers brought out their old class photos from when the seniors were IES students.

“You have a sense of pride to see them coming back through as adults,” Burke said. “It was very special.”

The Grad Walk was the first of its kind at Oak Mountain High School, and a fitting way to end both senior year and an Oak Mountain schools career, Schwartz and Burke said.

The event not only celebrated the seniors’ achievements and future endeavors, it also gave the elementary school students something to look up to and aspire to be.

“It was really cool for our students to see where they’re going,” Burke said. “It was exciting to them.”

The OMHS seniors had a mix of emotions while walking through the halls of their former schools: Excitement, stoic concentration and, most of all, confidence, Schwartz said.

“We strive to graduate seniors who are confident and ready to take on the world, and that’s what we saw in the hallways,” Schwartz said.

“We want every child in Shelby County to be a graduate,” Burke added. “It’s fun to see it all come to an end and know they’re going off to do something wonderful.”